The California Supreme Court has denied a Fresno school district’s request to review an appellate court ruling that was strongly critical of its use of no-bid contracts — a ruling that school contractors across the state fear may set a legal precedent that leaves them on the hook to repay millions of dollars in past contracts.

The ruling addressed the topic of newly popular lease-leaseback school construction contracts, which skirt the competitive public bidding process and allow districts to hand-pick the contractors they want to work with. The case and lease-leasebacks — particularly how they both relate to Eureka City Schools’ recent $50 million bond — are detailed in this week’s cover story, which can be found here.

Here’s a quick primer on lease-leasebacks from the story:

Outlined in the state education code, the lease-leaseback arrangement allows a district to lease its property to a contractor for a nominal fee — usually $1 a year. The contractor then finances and builds whatever project the district desires — say a new school — which it then leases back to the district for a monthly fee that covers both the financing and the construction. This allows districts to spread the costs of new building or renovation over decades and, once the final bill is paid off and the term of the lease is up, the property ownership reverts back to the district. But in creating this new funding avenue, the Legislature realized subjecting it to the competitive bidding process could become a nightmare for districts, leaving them to consider too many variables for a low-bid-take-all process to account for. So the Legislature made lease-leaseback construction arrangements exempt from competitive bidding requirements.


Recently, however, districts throughout the state have been using the arrangements specifically to skirt competitive bidding by essentially disguising construction processes that have no contractor-financing element to them as lease-leasebacks. In these cases, the district leases the property to the contractor, who builds out the project, and the district pays off the construction as it’s done using bond revenue. When building is complete, the property reverts back to the districts. But the appellate court said this violates the spirit of the law.

The immediate impact of the ruling is simply that it sends the case — in which a Fresno tax payer challenged Fresno Unified School District’s awarding of a $37 million contract to build a new middle school Harris Construction — back to the superior court that had dismissed it. But the ramifications of the ruling is that there is now case law in California stating two things: that a district’s awarding a contract to a company that previously consulted on the project represents a conflict of interest (akin to a fox guarding the henhouse, according to the plaintiff’s attorney in the case) and that, to be valid, lease-leaseback arrangements need to include both genuine contractor-financing and lease components.

On its face, this interpretation would render scores of contracts throughout the state illegal. Because state law stipulates that a contractor who performed work for a district under an illegal contract can be forced to repay the money gained from said contract, the ruling has caused a sizable stir in education and construction circles, with a host of contractor lobbying firms unsuccessfully launching an 11th hour push to have the Legislature amend state law to retroactively make these contracts legal.

San Diego attorney Kevin Carlin, who represented the plaintiff in the Fresno case, described the situation as follows: “Now that the contractors have been caught with their hand in our schools’ cookie jar, they are asking Sacramento legislators via last-minute gut and amend language that is retroactive to let them keep all the cookies they have taken from our schools under their illegal contracts.”

Carlin hailed the failed lobbying effort and the Supreme Court’s decision as wins for schools, students and taxpayers. Meanwhile, Fresno Unified officials told the Fresno Bee the court’s decision was “unexpected” and that they were huddling with their lawyers to figure out how to proceed. (The Bee story also includes the tidbit that both the FBI and the Fresno County District Attorney's Office have launched investigations into Fresno Unified's handling of the contract.)

In asking the Supreme Court to review the case, Fresno Unified also asked the court to de-publish the appellate court's ruling to prevent it from setting a precedent. That request was also denied.

What this means for Eureka is unclear. District officials have maintained that they crafted their lease-leasebacks — one with Dinsmore Construction for work on the Lincoln campus and another yet-to-be finalized one with DCI Builders for work on Alice Birney — with the Fresno ruling in mind. Carlin, however, reviewed the Dinsmore Construction agreement and said he believes it clearly violates the law.

Read more about the situation in the aforementioned cover story, which also details how Eureka’s school bond campaign is believed to have been the most expensive in county history, raising $68,000. The story also explains that, of the money raised, $67,950 came from 12 businesses, seven of which are currently under contract — or have agreed in principal — with the district to perform Measure-S funded work. Three more have been pre-qualified by the district for future bond work. (See the graphic below for more details.)

Journal attempts to reach Gregg Gardiner, who chaired the Citizens in Support of Eureka City Schools campaign, to ask about exactly how the campaign secured these donations have been unsuccessful. But, we’ll update this post if he gets back to us. 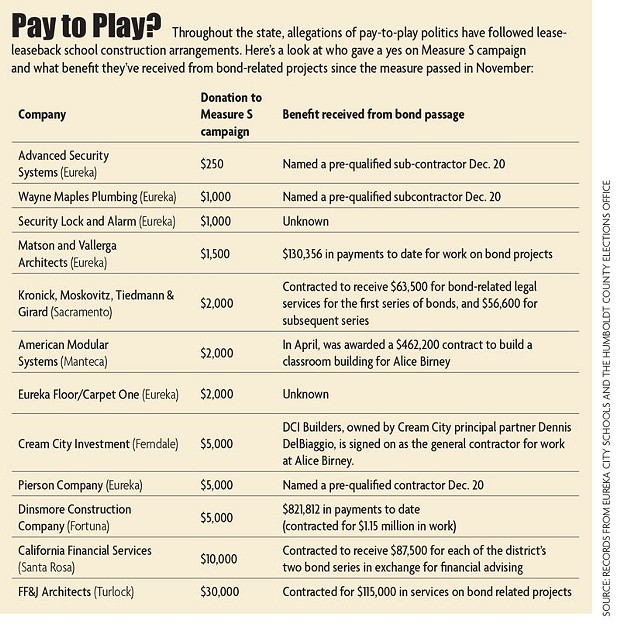