Look, I’ve missed it, okay? And people have started asking me, “Hey, did you ride your bike today?” Guilt colors my voice every time I have to answer, “No.” But I had reasons! One of which involved dental work that left my jaw increasingly sore until, two weeks after the filling, I was curled up on my futon groaning in pain. Not ideal biking conditions. Or anything else conditions. Another reason has been I lack the mindset of a regular bicycle commuter: I make my schedule and then see if biking works. What I should do is schedule commitments in such a way that I’m able to meet them by bike.

Not being able to ride my bike drove home a couple things – most immediately that I really needed to go back to the dentist. More big picture, the fact that I don’t live life at a pace that affords much opportunity for commuting via bike. With a daily to-do list as long as mine, the time factor is a constant deal-breaker. Perhaps I should reevaluate my lifestyle.

In the meantime, I managed to ride instead of drive to the Friday morning class I’m teaching at HSU.

The day had dawned bright. I’d packed my pannier in record speed. I forgot nothing, not even the antibiotics I’ve been taking for the aforementioned jaw issue. I pedaled through Manila without incident, stopped on the bridge over Mad River Slough to take some photos of godwits seeking breakfast in the shallow water, continued on, pleased to be immersed in our beautiful part of the world.

Then, just as I was admiring the blue snaking through the green field and the way the water reflected the cows standing alongside it, a semi-truck thundered up behind me, blew past so closely the gust of air blew my hair forward, pulled my bike toward the truck, scared the hell out of me. This, of course, was on the chunk of highway just east of Mad River Slough, the part where the shoulder narrows to about the width of bicycle handlebars. If that truck had been a foot closer, I’d have been smeared into the poppies, brambles and rocks that line the roadside.

I wish I’d caught the business name or license plate so I could have asked the driver what it was he hated. Bicyclists in general? Blondes? The song on the radio? His own life? 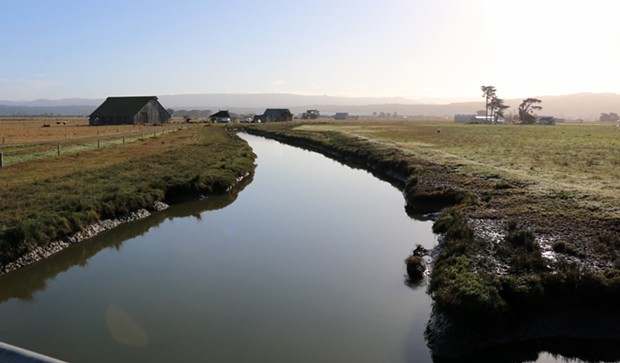 Frazzled but fine, I continued onward through the Bottoms and up to HSU. With a few minutes to spare, I locked up my bike, dashed into the Forestry Building locker room, swapped my bike pants and shirt for a dress, my helmet for a hair tie. Made it to class on the nose.

Do you ever have that thing happen where you’re not that sweaty while you’re exercising, but once you stop, the glands go on hyperdrive? Because that’s what happened. As I turned to write notes on the whiteboard, I could feel the sweat pooling down my back. The lack of hydration kicked in – why do I always think it’s a good idea to down a cup of coffee before I go get active? Making matters worse, I needed lip balm and that particular salve was buried in the bottom of my pannier. With all the sweating and lip-licking and desperate gulps of water, I am pretty sure the students assumed I was coming off a coke binge.

This is the second week of classes. I have never taught before. So there I was, near-clueless about this academic world in which I found myself, physically uncomfortable and yet trying to play it off like everything was cool. Including me. Coincidentally, part of the discussion revolved around the students’ upcoming three-to-five minute speeches, a project some of them were dreading. I wanted to reassure them they could do it – I wanted to tell them exactly how icky and out of my element I was feeling at the moment. Fortunately I was smart enough to instead tell them other embarrassing stories that were not so immediately revealing.

Class dismissed, I returned to my bike. The jaunt from HSU to my office is mostly downhill, just over a mile. Easy enough, except for the sheer magnitude of action happening on campus: drivers, bicyclists, skateboarders and pedestrians. When my brother lived in San Francisco, I once remarked how much I hated driving in that city. Too complicated, all those streets at weird angles, the overwhelming variety of traffic. “But it’s great,” he replied. “It’s like regular laws don’t apply and you have to live by your wits.”

That attitude kicked right in as I made my way down and around to B Street. I looked for an opening, dodged around people, focused on getting through. It worked. The only other encounter of note: The unicyclist flying down G Street, waving his way through the intersection at 11th with nary a blink.