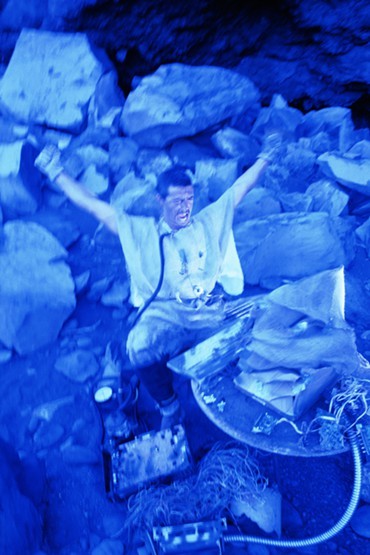 AT&T is offering a $10,000 reward for information that leads to the arrest and conviction for whoever sliced through a fiber optic line Thursday morning between Ukiah and Hopland, resulting in a 16-hour Internet, phone and television outage that impacted five counties.

Humboldt County was among the hardest hit by the outage, which stretched from 10:45 a.m. Thursday to 3 a.m. Friday, leaving those relying on AT&T for cell phone, Internet, television and some land-line services in the dark. The outage severely impacted some businesses, but it seems local emergency services maintained operations without much trouble.

Both the Eureka Police Department and the Humboldt County Sheriff’s Office reported their 911 dispatch centers were not impacted by the outage. “We were working closely with AT&T to make sure our 911 system was up and running,” Sheriff’s Office spokesperson Lt. Wayne Hanson said. “The only hiccup was that (AT&T customers) couldn’t call in.”

EPD Chief Andy Mills said that while dispatch was fully operational, the outage brought down officers’ mobile in-car computers and the department’s access to the California Law Enforcement Telecommunications System, which allows officers to search for outstanding warrants. “We were able to survive without them for the day,” Mills said.

The Mendocino County Sheriff’s Office believes someone cut the fiber optic line, which is normally buried under ground but was exposed due to a recent rock slide, looking for copper, which can be resold. When the vandal realized the wire was not copper, they simply fled the scene, according to law enforcement. The area where the line was cut is remote, according to this article in the Santa Rosa Press Democrat, but is frequented by teens, ATV riders and some marijuana farmers.

Back on October, AT&T customers experienced a similar, though briefer, outage, which the company attributed to a "fiber issue."

Some have pointed to the outage as evidence that there need to be more service redundancies on the North Coast, so the severing of a single line doesn’t leave swaths of customers without any service. Mills, asked if he would lean on AT&T to do something to make sure service for his officers is more reliable in the future, seemed to throw up his hands.

“We’re at the whim of AT&T,” he said. “They are the largest company in the world. What’s a tiny little department going to do?”

See the full press release from the Mendocino County Sheriff’s Office below.


On 09-03-2015 at approximately 10:30 AM the Mendocino County Sheriff's Office experienced a disruption of telephone (9-1-1, land-line and cellular) and internet services throughout Mendocino County.

During this time, a limited amount of communication methods were able to be put into place for the various public safety agencies to be able to receive and respond to public emergencies as needed.

Calls into 9-1-1 were re-routed to the CALFIRE Howard Forest dispatch center for distribution to local public safety dispatch centers affected by the 9-1-1 service disruption.

On 09-03-2015 at 6:30 PM a Deputy with the Mendocino County Sheriff's Office was dispatched to contact representatives with AT&T in the Burke Hill area of Ukiah, California.

Upon arrival the Deputy learned AT&T had experienced a sudden disruption of fiber optic services on 09-03-2015 at approximately 10:30 AM.

Immediate efforts were made by AT&T to locate the cause and location of the disruption, which was ultimately determined to be in a rural area approximately 1.5 miles south of Burke Hill Road in Ukiah, California.

Upon inspection of this area it was determined the fiber optic line that was located above ground had been cut apart.

At this time it is suspected the damage was caused as an intentional act of vandalism.

On 09-04-2015 at approximately 3:00 AM the Mendocino County Sheriff's Office noted a return of telephone services to their 9-1-1 emergency dispatch center.

This incident is still under investigation and anyone with information that might assist in the identification of any suspect(s) is urged to contact the Mendocino County Sheriff's Office Tip-Line by calling 707-234-2100.