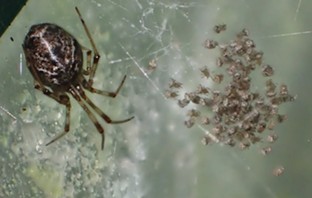 In grammar school I learned that only the birds and mammals cared for their young. Later I learned that crocodiles and alligators build and protect nests, but largely the “lower lifeforms” do little after laying their eggs. Aside from the social insects that feed, protect and rear the young into adulthood, parental care is relatively rare in the insect world. 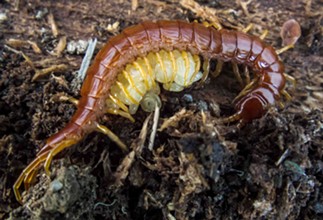 Of course there are exceptions. Take many members of the giant waterbug family (Belostomatidae). The female cements the eggs to the male's back and, through the sheer self preservation, he protects the young. Among the spiders, scorpions and centipedes, however, there are a great many examples. I have often observed female American house spiders (Parasteatoda tepidariorum) building a web and case in which females lay eggs. After they hatch, babies may stay many days in the mother's web feeding on whatever may be netted. The common little wolf spider (family Lycosidae), which does not spin a web in my yard, carries an egg sack around on her abdomen until the spiderlings hatch and then, for a few days, carries them on her back. A little while ago, as I was dismantling an old wood pile I happened across three mother centipedes (Scolopocryptops gracilis) each tenaciously protecting their clutch.

The black lace weaver, a species of spider which does not live around here, probably takes the cake as a “good mother.” Amaurobius ferox lays her eggs, tends the web and once they have hatched, lays a second set of eggs for the babies to consume. They molt once and then she actively encourages them to eat her, which they do.
She is a member of the “hacklemesh” family of spiders of which there are local examples. Do they behave in the same way? No one knows. It has been said, “wherever you are you are within six feet of a spider,” so, that very same drama might just be playing itself this very minute inside one of your walls.