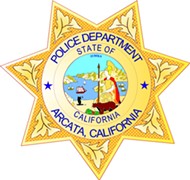 UPDATE: The Humboldt County Coroner's office has identifed the woman as Sarah Anne Walsh, age 25, from Crossville, Tennessee. The sheriff's office says that they do not know at this time what Walsh, who appears to have committed suicide, was doing in Humboldt County.

"At the time of death, the deceased had nothing on her person that would indicate her identity," says the press release from Deputy Coroner Ernie Stewart. The FBI fingerprint identification system positively identified Walsh on September 21. Her family has been notified.

UPDATE: Humboldt County Deputy Coroner Ernie Stewart says the woman's death appears to be a suicide. She had apparently hanged herself by sliding down a hill.

Stewart offered a description of the woman in the hopes that the public can help identify her.

She was wearing a shirt that said "Gypsy Soul", with skinny jeans and a skirt over the jeans.

And she had several tattoos: a thin outline of angel wings covering her entire back with a four-sided star in thick, bold ink inside one of the wings; a large red rose on her hip; and a black scorpion 5 to 6 inches long on her lower left abdomen.

A hiker in Arcata’s Redwood Park this afternoon found the dead body of a young woman.

Arcata Police Chief Tom Chapman said investigators found no signs of trauma on the body and no evidence of foul play, though the department is awaiting an official cause of death from the Humboldt County Coroner’s Office. Chapman said no identification was found on the body, which appears to be that of a young woman in her early 20s. He said investigators are currently working to identify the woman, who he estimated has been deceased for three to seven days.

Chapman said the hiker found the woman about 400 yards from the park’s 14th Street parking lot. “The body was just maybe 15 yards or so off of a main trail,” Chapman said. “The area, the vegetation and the terrain is dense enough and steep enough that it was really undetectable. Walking on the trail, you really couldn’t see the body. The hiker just happened to be taking a short cut and discovered it.”

The first obvious step for investigators, Chapman said, is to check missing persons reports in the area to search for potential matches.

Chapman asked that anyone with information about the case, or women who have gone missing in recent weeks, call the Arcata Police Department at 822-2428.