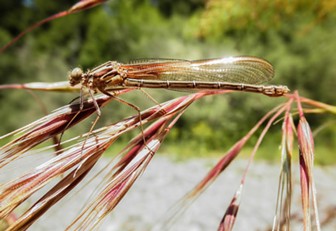 Whenever I give a talk on dragonflies, I point out that there are two subgroups to the order Odonata. The dragonflies (anisoptera, which means “same wing”) and the damselfiles (zygoptera meaning “different wing”), which I am told refers to the sizes and shapes of the front and hind wings. I guess because they're bigger and often showier the dragons get all the press, but their little cousins have their own graceful charm.
The dragons are larger and more robust. They always hold their wings out flat, never folding them over their backs. The damsels' abdomens are about as thick as a pencil lead, and with one exception, fold their wings over their backs when at rest. Like the dragons they spend their larval stages hunting small critters in the water, emerging as nymphs to shed their last molt, spread their wings and become areal hunters. 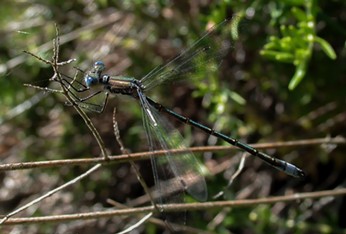 For a long time I thought they were comparatively poor fliers until watching half a dozen male American rubyspots vying for position in a roosting spot. Half an hour spent futilely trying to capture their beauty and grace with a camera convinced me otherwise. They were way too quick and maneuverable. I have often been surprised when I upload images to my computer and examine the photos that one of the little damsels is daintily munching on some unfortunate insect. The evidence of their continued survival since the Carboniferous era speaks that they are effective predators. Whatever they've been doing for the last 300 million or so years seems to work. 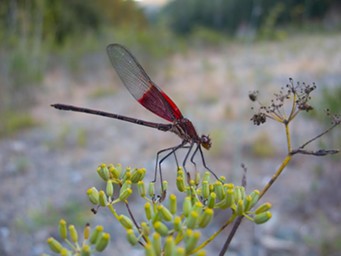 In one presentation in a local grammar school, I pointed out that, much like birds, the males were the pretty ones among the Odinates while the females were usually more drab. I could see a couple of the young ladies were crestfallen by that, so I asked why they thought that might be. There were few attempts. When I answered that the females were more important and needed the added protection of camouflage, they beamed! 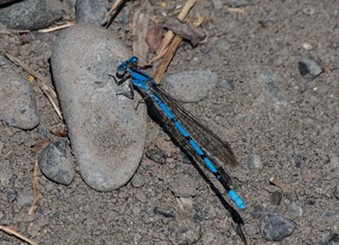 That exception: The damselfly family of Lestidae are known as “spreadwings” and often land with their wings outstretched. Even so, once you see the difference there is really no mistaking a dragon for a damsel.