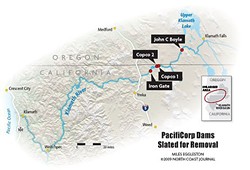 The Yurok Tribe has announced it will withdraw its support of the Klamath Basin Restoration Agreement, the massive, multi-agency restoration plan originally signed in 2010 that’s sat untouched by Congress for the last five years.

The Karuk Tribe and Oregon Klamath Tribes will also withdraw at the end of the year if Congress doesn’t act, according to a Times-Standard report. The Yurok Tribe is citing a provision in the agreement that it says allows the tribe to withdraw its support.


In a press release, the Yurok Tribe says the agreement has changed over time, and that negotiations about the Upper Klamath Basin have proceeded without tribal input, despite promises to include Yurok negotiators.

The KBRA, which includes a is linked to plans for removing four dams on the Klamath River, was remarkable in the scope of interested parties that signed onto the agreement. Many parties, as evidenced by the Yurok Tribe’s announcement, were not completely happy with the specifics of the agreement, but there was hope in the early days that the consensus would be enough to get Congress to take action. That has not happened.

North Coast Congressman Jared Huffman released a statement saying he was disappointed with the tribe's decision, but shared its frustration with the lack of action in Congress.

Over the past decade, the Yurok Tribe has worked diligently to bring together diverse irrigation, environmental, tribal, power industry, federal, and state parties to develop a workable solution for the Klamath River that would remove the Klamath River dams, restore the fishery, and protect tribal water rights. These efforts, along with the efforts of others, resulted in the historic Klamath Basin Restoration Agreement (KBRA) and related Klamath Hydroelectric Settlement Agreement (KHSA), collectively called the Klamath Agreements.

The KBRA, which was signed in February 2010 and amended in 2012, was carefully negotiated to provide fish and tribal water rights protections for the entire river system while also accounting for irrigation, power, and other interests. The KHSA complemented these benefits by orchestrating dam removal in a timely manner. Unfortunately, Congress has failed to pass legislation authorizing the agreements, and over time the bargained for benefits of the agreements have become unachievable.

Despite numerous discussions, informal and formal meetings, and the best efforts of the disputing parties, DOI and the Tribe were not able to develop mutually acceptable language. It has become apparent that a signed agreement restoring the KBRA balance is no longer possible. As a result, the Yurok Tribe is withdrawing from the Klamath Agreements.

The Tribe and DOI have invested countless hours discussing issues, exploring ways to restore the bargained for benefits in the KBRA, and attempting to develop mutually acceptable language for an agreement. Despite these diligent efforts and numerous concessions by the Tribe, the dispute was not resolved. In the absence of resolution, the Tribe is referring the dispute to the Klamath Basin Coordinating Council pursuant to KBRA section 6.5.3. The Tribe requests the Klamath Basin Coordinating Council expedite any attempt to resolve the dispute.

“While I am disappointed by the Yurok Tribe’s change of heart on the Klamath agreements, I share their frustration with the lack of action in Congress over the past three years. This historic consensus effort to remove Klamath River dams and restore one of the most important salmon rivers on the West Coast is premised on congressional authorization, and as years tick by with little action by Congress the obvious risk is that the stakeholder consensus starts to unravel.

“I remain convinced that the Klamath agreements are the best way forward and that a return to squabbling over water and the future of the dams on the river is a step backward. But my patience, not unlike the Yurok Tribe’s, is wearing thin due to delays and inequities in addressing the concerns of stakeholders in my district, where the Klamath River is the lifeblood for many of my constituents.

“The Yurok announcement demonstrates that time is not on our side.

“As Congress has failed to act, we have narrowly avoided massive fish kills in the Klamath each of the past three years. For the tribes, communities and fisheries of my district, restoring the Klamath River is too important to wait endlessly. It’s time for Congress to get moving on forward-thinking Klamath legislation that removes the dams and restores the river and its fisheries for the benefit of stakeholders in both California and Oregon.”

Editor's note: This post was changed to clarify the KBRA's connection to dam removal plans.