Sidney Dominitz, a longtime Humboldt State University journalism lecturer and editor of the Northcoast Environmental Center’s EcoNews, died early Saturday morning of complications from a heart condition. He was 74.

A fixture on the North Coast for roughly 40 years, Dominitz is remembered by friends and colleagues as a man whose sharp wit and warm heart spilled through his editing pen as he improved the work of those around him. A born copy editor, Dominitz devoted nearly three decades of his life to editing the EcoNews, using his mastery of the English language and wealth of newspaper experience to fight for the forests, waterways and wildlife he loved.


The second child of Wolf and Blanca in New York City, Dominitz arrived in Humboldt County in 1976 and became captured by its rugged coastal beauty and counter-culture spirit. He joined the NEC as one of its only paid staff members in 1976, and went on to found its coastal cleanup programs and take EcoNews from a nonprofit newsletter to a respected environmental advocacy newspaper with a circulation of 8,500. Dominitz also become one of Executive Director Tim McKay’s most trusted advisers as McKay became the North Coast’s most influential environmental voice. “Tim was a wonderful, passionate spokesman for the environment, but he was also well edited by Sid,” recalled Andy Alm, who spent years working alongside both men. “Where we are today is a result of their vision, that clear picture of where things were and how they could be. I give Sid a lot of credit for that.” 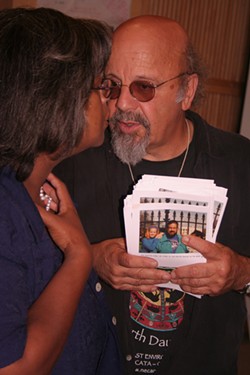 In 1978, Dominitz began lecturing at HSU, where he shared the knowledge he’d picked up in his 11 years as a copy editor, including six years spent as the chief copy editor for Reuters’ London bureau. In the classroom, Dominitz developed a reputation as tough, demanding teacher. “He was known as the scary, grumpy guy and students had a really hard time in his class,” said Marcy Burstiner, who chairs HSU’s journalism department. “He was tough and he challenged them, but every student who made it through his class was a way better writer and reporter for it.”

The tales of “Sid Vicious,” as he was known in HSU journalism circles, are legendary. He was known to give current events quizzes to his editing classes and then berate students for their low scores, urging them to pursue careers in the food service industry instead of journalism. On the last day students could withdraw from classes without it showing up on their transcripts, he’d bring drop forms to class and put them on students’ desks. But to students who were serious and embraced the challenge of mastering a craft, Dominitz gave himself freely. “Any students he could see really wanted to learn, he’d just spend so much time with them,” Burstiner said.

Dominitz carried that exacting, demanding persona with him to the EcoNews as well. “He would regularly rip to shreds other people’s writing, layout and headlines,” recalled Mark Larson, the former chair of HSU’s journalism department who regularly volunteered with EcoNews. “He approached editing with his brain stuffed full of trivia, history and facts that he used to improve other people’s copy.” There was nothing inherently mean or narcissistic about the way Dominitz carried himself in the classroom or edited EcoNews, according to Larson, it was just that he loved journalism too much and saw it as too important to be done poorly or ceded to people who weren’t humbled by its power.

Those close to him will remember Dominitz for the passion that ran through every aspect of his life, whether it was editing pen in hand, on the basketball court, in the classroom, at the poker table or in his friendships. And, as long as you didn’t catch him at the lectern or his editing table, Dominitz exuded warmth and kindness. “Inside, he was just a complete and utter mush,” Burstiner said, explaining that this was most evident when Domintiz was around children, whom he loveed. While living in London and working Reuters in 1971, Dominitz welcomed the birth of his only child, Zachary, whom he adored.

Connie Stewart, who came to know Dominitz in the mid-1980s while working at the NEC and continued to lean on him as an editor in her current role heading the California Center for Rural Policy, said she’ll most remember Dominitz for his kindness. “He was a great friend,” she said. “Some of my favorite memories of him are when I was sick, he would come over with breakfast and read the newspaper to me. I’ll miss that.”

Dominitz is survived by his son, Zachary, his older brother, Henry, and his ex-wife, Sydelle Lapidus. A ceremony honoring his life will be held at 2 p.m. Saturday at the Trinidad Cemetery, followed by a reception at his home. Those planning on attending are asked to park in town and walk to the cemetery, as parking is limited. In lieu of flowers, the family asks those who feel compelled to make a donation to the NEC or plant a tree in his honor.

Editor’s Note: In the interest of full disclosure, it should be noted that I took several courses from Sid at Humboldt State University. Those included an editing class, in which Sid asked us all to write our own obituaries as our first assignment. Mine came back bloodied with red ink, and I have little doubt this piece would be stronger had it seen Sid’s red pen.

This post has been updated to more accurately reflect the cause and time of Dominitz's death.