Kathleen Hytholt doesn't know where she's going to go. Hytholt has been living in a makeshift shelter in the greenbelt at the corner of Sixth and T streets in Eureka for two months. She has been homeless for three years. The young people in the camp call her "Mama Kat." Their kids call her "Grandma Kat."

"I won't go to the Devil's Playground," she said, referring to the PalCo Marsh area behind the mall where around 100 people are camped. "I won't go to Cooper Gulch either. Bad things happen there. Evil things. I wouldn't be here if I didn't have to be. Nobody would."

But the Eureka Police Department is urging her, and others, to move to the north part of the PalCo marsh. While previous plans to establish a "sanctuary camp" for the city's homeless were abandoned by the city, it appears as though an unofficial "safe place" is in fact being encouraged. A rash of recent violence among the homeless population camped in Eureka's marshes and forested areas has prompted the agency to consolidate campers in the flat, open section north of the Bayshore Mall.


"We have had an unbelievable amount of violence in and around the homeless camps," said Chief Andy Mills. "In the past month we've had four stabbings and one murder related to the homeless population. We’re doing everything we can possibly do, yet the violence continues."

While previous police efforts have focused on "cajoling" the estimated 730 people homeless in Eureka into transitional housing, Mills said he is now directing his officers to move people to one spot that's more accessible to police, fire and medical services. Right now, he said, there isn't adequate housing for every person who is camping, but getting people out of the trees will allow the police to protect them more effectively. Police officers have visited the marsh and other areas of the city instructing campers to move.

Hytholt's camp, however, is not on city property, but a stretch of land owned by Caltrans. Betsy Totten, Caltrans' spokesperson, confirmed the agency received multiple complaints from neighbors about people camping in the area, which is bordered by the Humboldt County Office of Education and the Eureka Community School. At a previous Eureka City Council meeting, Mills said there have been reports of prostitution in the greenbelt.

Because of the jurisdictional complications of having campers on private land, the Eureka Police Department was not able to arrest people camping there, but offered their protection of Sheriff's Work Alternative Program inmates should they come to clean. EPD officers also served notice on Hytholt and others, giving her until 9 a.m. Friday morning to take down her tent and remove her things.

"They told me that they were going to throw away all of the garbage," say Hytholt, who sleeps on a mattress beneath a tarp. The area around her is cluttered with a mishmash of items: food, clothes, tools, childrens toys. "But that’s not  garbage, that’s my stuff." 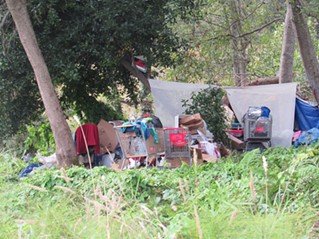 On Friday morning, a crew of SWAP. inmates showed up. So did Janelle Egger, a  local activist who has been working with Hytholt. Egger, who described herself as "very frustrated" with the situation, said Hytholt's physical condition makes it difficult for her to move. Hytholt was in a car accident several years ago and now suffers from arthritis, respiratory problems and a hip that spontaneously dislocates. She was at the Eureka Rehabilitation and Wellness Center for six months, and says that she was discharged without getting the physical therapy she needed because she was on MediCal.

As Egger spoke with the SWAP correctional officer, two Caltrans workers arrived to assess the scene. Maintenance workers with the Humboldt County Office of Education, who had provided a large dumpster, also arrived. The SWAP inmates drank coffee and exchanged jokes. Off the bank of Sixth Street, Hytholt's daughter could be seen frantically putting items in plastic bags.

"I've been busting my ass all night, trying to get this done," said the woman, who did not want to be named. Another man camped near Hytholt began pulling items from his own tent, including an ancient lawnmower. The SWAP crew jeered.

Then the Eureka Police Department showed up. An officer, then his sergeant, then Capt. Steven Watson, who explained that the campers had gotten "numerous advance notices" to leave. People camping on city property against police orders are now risking arrest. Watson said that these measures are for the safety of campers. As he spoke, Hytholt sobbed. Her daughter continued to try and sort out their belongings. The SWAP crew remained on standby, drinking coffee. An RV with gawking tourists rolled slowly past. Another man, recently rehoused at the Multiple Assistance Center, came by to check in on his old camp. He pulled up his pantsleg to show off a healing scar. His leg had gotten cut and infected when he lived at the site, he said, but was improving since he moved into the Multiple Assistance Center. Hytholt said EPD's Mobile Intervention and Services Team (MIST) has been working with her to find housing, but she doesn't receive social security income, and doesn't want to leave her belongings and her dog behind to go to the Eureka Rescue Mission.

By the time Totten arrived, four different agencies were on the scene, waiting for the go-ahead to move forward. Totten strode down to the camp and introduced herself to Hytholt, who was breathing fast.

"You're going to give her a heart attack," said her daughter.

"Can I give you a hug? Let me give you a hug." Totten put her arms around Hytholt. The women embraced for a long moment, then Totten pulled away and put her hands on Hytholt's cheeks.

"Look at me," she said. "Look at me. Listen. Woman to woman, mother to mother, we're going to figure this out."

"They're going to throw away my stuff," said Hytholt.

"Listen to me, okay? We're not going to just pick up your stuff and throw it away. But you can't stay here. This is not safe for you."

As Hytholt and Totten talked, the SWAP crew began making its way down the bank, picking up bags of trash left by the sidewalk and throwing them into the dumpster.

"Him," said Hytholt, pointing to the side of the hill where her tent was perched.

The officers looked closer. What appeared at first to be a pile of blankets on the bare ground was an elderly man, sleeping facedown in a nest of afghans, sleeping bags and tarps. Hytholt explained that he had a broken arm.

Officer Jerad Christiansen woke the man and asked him if he'd like to go to the hospital. The man said that he had already been and "they hadn't done anything for him," displaying his medical wristband. Christiansen helped him stand and take a drink of water. His right arm was swollen and unusable.

While Christiansen tried to convince the man to accept medical help, Totten was negotiating with Hytholt. Ultimately they resolved that she would receive a week's grace period, enough time to gather her belongings and find a place to stay. Egger and Councilmember Kim Bergel are working with her to find housing. Other campers in the area were evicted and the area cleaned of trash. Totten reported that they threw away several dozen used needles. Hytholt and her neighbor, the man with the broken arm, both went to the nearby Open Door clinic for medical attention. 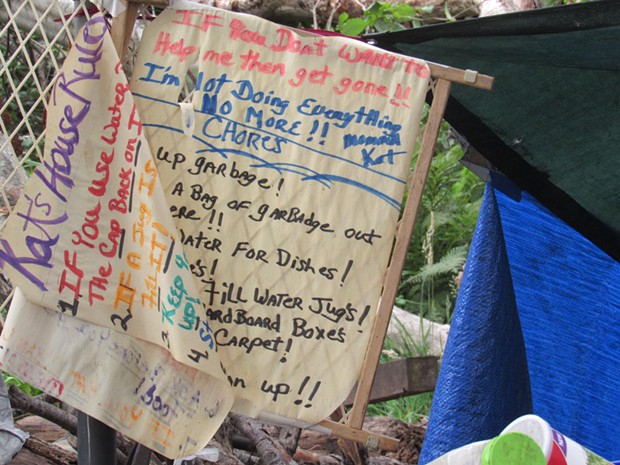 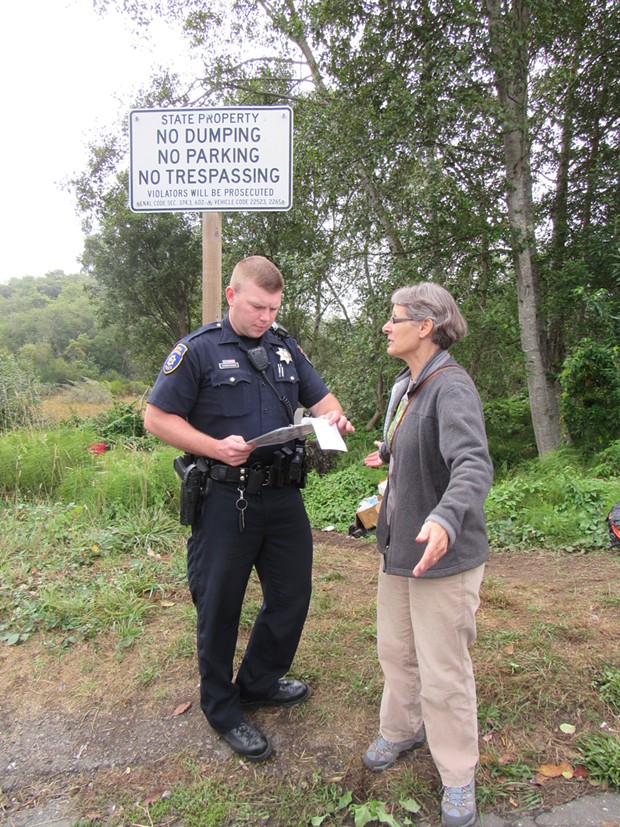