A drone video of the PalCo Marsh, known to some as "The Devil's Playground," shows camps still firmly entrenched in the wooded area just behind the mall, an area where the Eureka Police Department is preparing to cite and arrest campers. EPD is encouraging people to move north, to the flat area adjacent to the Bayshore Mall's overflow parking lot, which would provide easier access for medical and police personnel. The policy is in response to what EPD Chief Andy Mills has called an "an unbelievable amount of violence in and around the homeless camps."

Mills said that they want people "to be in an area where they have services, have help."

"We don’t have adequate housing for everybody who’s houseless," he said. "I have directed officers to move people towards pole shed area, where we have more access for police, fire and medics."

In a letter to a local homeless advocate, EPD Capt. Brian Stephens said the department will be doing enforcement operations in certain areas to crack down on illegal camping. "We have identified one area where we will be doing less enforcement, unless there is a rise in violence, that we are telling people to go," Stephens wrote, describing the greenbelt at the foot of Vigo Street north of the mall. "This area will still see police presence but will not be a focus area of enforcement."

EPD Capt. Steve Watson said the agency is taking a zero tolerance policy towards camping in city parks, such as Cooper Gulch or Sequoia Park.

But Councilmember Kim Bergel said this is not a call for campers in other parts of the city to move to the marsh, where they are trying to "move people out." Watson also said he doesn't want the marsh to become known regionally as "the spot to go." A woman whose camp at the corner of Sixth and T streets was served notice by EPD officers last week said she was told to "move to the Devil's Playground."

The Eureka City Council will revisit the issue Oct. 20, at which time Bergel and others plan to present a definitive "exit plan" for marsh campers.

On Saturday, Sept. 19, the Eureka Police Department and Humboldt Bay Fire were called to the greenbelt area near the foot of West Hawthorne Street, north of the marsh area, for reports of a dead body. The Lost Coast Outpost reported on scanner calls about a deceased male, but the coroner's office has no further information at this time. Watson confirmed that the man was found by a fellow homeless person, and at the moment no foul play is suspected.

Both Watson and Bergel said they are opposed to use of the name "The Devil's Playground." Bergel said it "demonizes" residents. Watson said his department is discouraging the sense of ownership and "entitlement" some marsh campers have developed.

Facebook activism group "Operation Safe Streets," in which users post updates about crime and homeless issues in Humboldt County, is encouraging people to attend an anti-crime rally in front of the Bayshore Mall on Oct. 4.

A service fair will be held in the north end of the parking lot, this Friday, from 9 a.m. to 1 p.m. Watson said EPD officers will not be doing a "sweep" of restricted camping areas, but will be continuing enforcement at the south end of the marsh, and those who refuse to move from the area will be arrested under the city's camping ordinance. 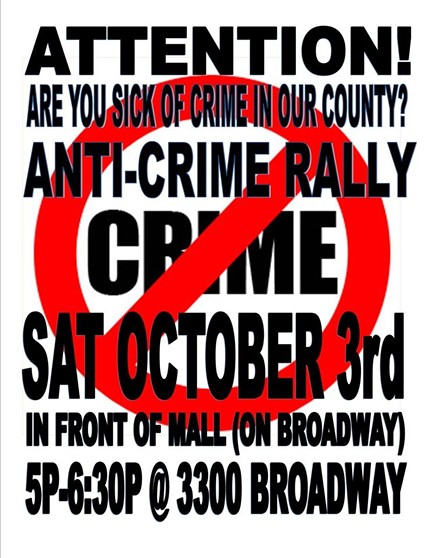