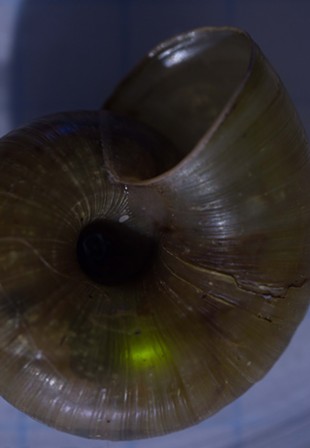 I think the best and most frustrating thing about nature study is that one thing almost always leads to several more, and each one of those leads to still more.
I have a particular fondness for glowing things, especially our local glow worms, Pterotus obscuripinnes. Studying them I learned they feed almost exclusively on small slugs and snails.


In all my excursions I have found three individuals glowing merrily inside a shell as they dine on escargot tartar. Eventually it sunk in that the shells in which I'd found them did not resemble the big snails that bedevil my garden. I have always been one to tip over pieces of bark or sticks of wood just to see what is under them. With a new awareness, I started finding many empty snail shells, mostly smaller and lighter than the big imported brown garden snail (Cornu aspersum), or the Pacific Sideband (Monadenia fidelis) with which I was slightly familiar.

Then I found something I had never before seen. A snail whose shell was actually fuzzy. I had to know more. Further investigation led me to a very nice book, Land Snails and Slugs of the Pacific Northwest, which I was able to get through my local library lending program. I learned that aside from the gardener's bane, there are many species of snails including the robust lancetooth (Haplotrema vancouverense), which is listed as a predator! So what does a snail hunt? Other snails of course — what else was it going to catch? 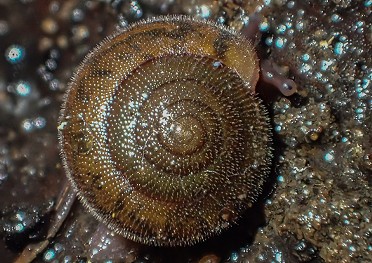 That hairy snail shell? Over the next few weeks I found several more under pieces of bark. As best I can tell without dissecting a specimen, they were probably species of Vespericola, or possibly Cryptomastix.

As you can see I had to put a stop to this. Things were spiraling out of control. I didn't have time to learn an entire new set of animals which were merely being studied as the foodstuff for the one in which I was interested. I found that, for the most part, only one or two of the many species of snails are problems in my garden. The vast majority of species are content to live out their lives hidden in leaf litter and under sticks and rocks, never interacting with humankind in any way.

But then again ... The gastropods have a certain cold and slimy charm. They make great photographic subjects since they seldom escape, and you can use very slow shutter speeds.