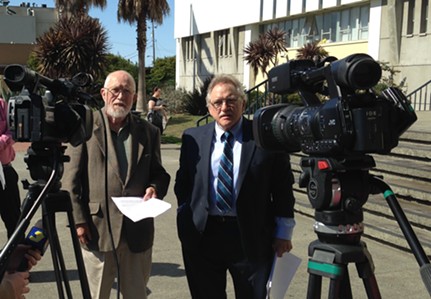 Long-time local taxpayers' advocate Leo Sears filed a conflict of interest lawsuit today, alleging that the Humboldt County Harbor, Conservation and Recreation District violated state law when it accepted a loan from Coast Seafoods and then gave the company a lease extension to cultivate oysters on hundreds of acres of tidelands in Humboldt Bay.

Specifically, the suit takes aim at Second District Commissioner Greg Dale, who also works as Coast Seafoods’ operations manager, alleging that even though Dale didn’t vote on either the loan or the lease extension, he had a hand in negotiating both.


“As the court has said in this type of situation, no man can serve two masters,” Sears, flanked by his attorney, Bill Bertain, told reporters on the courthouse steps as Dale stood behind the pair, proudly displaying his re-election button, in a piece of classic political theater.

After the press conference, Dale questioned the motives of the suit and maintained he and the district have done nothing wrong.

“This is a political stunt and it’s absolutely not a coincidence that these folks who have been sending me threats for a month and a half are doing this on the day absentee ballots are being sent out,” Dale said.

The suit, which comes as Dale is facing a heated challenge from Nick Angeloff for his seat on the commission, centers around Dale’s day job at Coast Seafoods and his role in the loan and lease agreements reached between the company and the district.

Sears alleges that the agreements amount to a quid pro quo exchange, wherein the company offered the loan in exchange for an extension and modification of its existing mariculture lease. While Dale didn’t vote on either of the agreements, Sears maintained the commissioner helped negotiate both, amounting to a clear violation of California conflict of interest law (Government Code Section 1090).

The district needed the loan to facilitate its cleanup of the abandoned Samoa Pulp Mill property, which contained millions of gallons of dangerous and caustic pulping liquours housed in failing tanks and the district acquired in 2013 for $1. But, rather than paying off the loan — and its 3.5-percent interest rate — out of its general fund, the district then agreed to extend and modify its lease with Coast Seafoods so the company’s lease payments would essentially be used to pay off the borrowed funds. The lease extension is good for 40 years, or until the district pays off the entire $1.25 million loan, at which time the lease would convert to a traditional five-year lease with Coast Seafoods making payments to the district.

Dale maintains that he had no part in negotiating either deal, saying he simply toured the old mill site back in 2013 and relayed to Coast Seafoods' owners that the situation on the property was dire and a potential threat to the business. He said he has since recused himself from all discussions of both agreements and was absent for both votes.

It seems the suit will ultimately be decided upon the question of whether Dale had a true financial interest in the commission’s decisions to accept the loan and subsequent lease agreement or merely a remote one, which would mean there’s no legal conflict of interest. Under California Government Code Section 1091, someone has a remote interest in the outcome of a decision if all of the following are true:

In Dale’s case, Coast Seafoods has more than 10 employees, and Dale had worked there decades prior to taking office as a commissioner but has no ownership stake in the company. Sears’ lawsuit alleges Dale is an officer of the company, though he disputes that. Similarly, Sears’ suit claims Dale had a hand in the negotiations and that, specifically, he told the Fortuna Chamber of Commerce on Sept. 28 that “he was the person who conceived the idea of Coast Seafoods loaning money to the Harbor District and that he was the one who started the process of making the loan to the Harbor District,” an allegation that Dale denies.

For his part, Dale sees the whole lawsuit — and his election challenge — as spawning from efforts to create an east-west rail line connecting Humboldt Bay to shipping routes throughout the country. The district angered some of the pro-rail set some years back when it chose not to spend hundreds of thousands of dollars in grant money on a study looking at the feasibility of the rail line and instead spent $20,000 on a preliminary study, which ultimately estimated the rail line would cost more than $1 billion to create with little hope of penciling out financially.

“This is a political ploy,” Dale said, “and it’s all about the east-west rail.”

Sears countered that his suit has “nothing to do with rail,” noting that he’s not a member of any pro-rail groups. Instead, Sears said, this is about good governance and protecting taxpayers from conflicts of interest. He said he hoped to avoid the suit, having repeatedly urged Dale — both publicly and privately — to step down from the commission.

While both Sears and Bertain said the suit is not about politics and the commission’s looming election, both said they hope to see Dale’s tenure on the commission come to an end.

See the full press release from Bertain copied below, and view the full complaint filed today by clicking the PDF.


FOR IMMEDIATE RELEASE
PRESS RELEASE
81 YEAR OLD GOOD GOVERNMENT ADVOCATE TAKES ON HARBOR DISTRICT; CLAIMS $1.25 MILLION LOAN AND EXTENSION OF LEASE VIOLATES GOVERNMENT CODE §1090 DUE TO CONFLICT OF INTEREST; SAYS COMMISSIONER GREG DALE MUST GO
Leo Sears, a longtime advocate for taxpayers’ rights in Humboldt County, filed suit today claiming that California Government Code §1090 has been violated by the Harbor District and particularly by Second Division Commissioner Greg Dale, Operations Manager for Coast Seafoods.
“I really wanted to avoid filing this lawsuit. In my Letter to the Editor on September 16th, and in talking with Greg, I tried to get him to see that he should resign to remove the conflict of interests and the jeopardy not only to himself but to the Harbor district. As the Courts have said in this type of situation, ‘No man can serve two masters.’ Human nature being what it is, good government requires laws against conflict of interest.”
The State Legislature recognized this when it enacted Government Code §1090 back in 1943 and the California Supreme Court applied §1090 correctly in the case of Thomson v. Call back in 1985. Sears alleges that “As the Supreme Court said, §1090 is not only intended to prevent conflicts of interest but also to prevent the appearance of conflicts of interest. The suit alleges §1090 was violated when Commissioner Greg Dale’s employer, Coast Seafoods, loaned $1.25 million to the Humboldt Bay Harbor District in a quid pro quo for receiving an extended and expanded lease on over 1,400 acres of tidelands on Humboldt Bay, at the same time that Greg Dale was holding the position of Southwest Operations Manager and Policy Advisor for Coast Seafoods Company, a subsidiary of the largest seafood processor on the West Coast, Pacific Seafoods”.
“Many people in this community have been scratching their head since September 10th when the Harbor District signed a multi-year extension of the lease with Coast Seafoods in exchange for the $1.25 million loan. All the commissioners knew that Greg Dale was the top ranking officer for Coast Seafoods in Humboldt County. The complaint alleges that even though when the lease was approved Mr. Dale was
For More Information Contact: William G. Bertain, Esq.
(707) 443-5078 1310 Sixth Street Eureka, CA 95501
      
absent, under §1090, the conflict of interest laws were violated. Leo believes that Commissioner Dale’s interest in Coast Seafoods is not a remote interest and that it is not a non-interest. It doesn’t fit any of the exceptions that would exempt him from being found to have engaged in a conflict of interest. Whether acting under poor advice or not, the law says he must no longer serve on the Commission.”
§1090 packs a wallop – and it’s necessary. And it is there for a purpose – to prevent exactly the kind of transaction that the Harbor District and Coast Seafoods entered into. §1090 says that the Lease Extension and the Limited Obligation Note for $1.25 million signed on May 27 of 2014 are void. And to the surprise of many, including my attorney, case law under §1090 seems to say that the Harbor District does not have to return the $1.25 million to Coast Seafoods.” The law in California against conflict of interests is intended to be tough for a reason. And it is. And its impact teaches a lesson.
A good number of people told the Harbor Commissioners at public meetings that the existing conflict of interest of Mr. Dale rendered the proposed Lease Extension and the Limited Obligation Note void, but the commissioners ignored those citizens.
Last week, Sears’ lawsuit was assisted significantly, when on Monday, September 28th, Greg Dale told the public that was in attendance at the luncheon meeting of the Fortuna Chamber of Commerce that he was the one who conceived the idea and pushed the idea of his employer, Coast Seafoods, making a loan to the Harbor District to assist in the removal of pulp processing liquors from the Harbor Districts recently purchased property at Samoa that was formerly the Freshwater Tissue Pulp Mill. The other Harbor Commissioners and their Executive Director accepted Coast Seafoods’ proposal presented by Greg Dale in exchange for an extension on Coast Seafoods’ loan proposal with the District.
“Violating §1090 doesn’t mean that Greg Dale is a bad person, but it means he can no longer serve as a Harbor Commissioner. It is that simple. And that is the reason we filed this lawsuit, to make sure that the people of this County are protected against conflicts of interest – even when one of the goals of the illicit transaction may seem to be beneficent. No man, no office holder, no public entity is above the law. That is America.”
Many citizens believe that the Harbor District failed to make sufficient effort to pursue alternative means of obtaining the funds to deal with the problem of the black liquors that the district knew were on the
pulp mill site when they purchased the site of the former LP pulp mill for $1 while agreeing to indemnify the seller. Some local people believe that the Harbor District could have arranged with the Environmental Protection Agency (EPA) a deal similar to that which they ultimately achieved without having to borrow $1.25 million from its lessee, Coast Seafoods. But even if that had not worked out, Mr. Sears suit alleges that §1090 of the Government Code prohibits what the District did with Coast Seafoods while Greg Dale served as both a commissioner of the District and as the top operations officer for Coast Seafoods in Humboldt County. Greg Dale’s interest was not remote. It was not a “non-interest”. His interest was direct, not remote, and falls within the purview of §1090. And therefore the deal, under the law, is void.