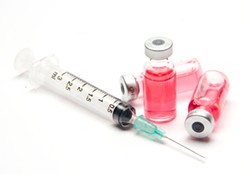 Signed into law in June by Gov. Jerry Brown, the new law requires that all children be vaccinated for a variety of infectious diseases before attending school, closing a long-standing exemption for families that opted not to vaccinate due to religious or personal beliefs. The law has faced a fierce backlash from a parents who fear vaccinating imperils their children’s health or is against their religion, and saw the law as an infringement on their rights. A repeal effort spawned almost immediately.


It’s been clear for some time, however, that the effort was struggling uphill toward getting a repeal measure on the November ballot. Supports of the repeal raised less than $175,000 to pay for professional signature gathering, far short of their stated goal of $750,000. And Thursday the California Secretary of State’s Office reported that it had received fewer than 234,000 signatures in support of the measure, less than two-thirds of the 366,000 valid signatures needed to get the measure on the ballot.

It’s interesting to note, however, that 1,790 of those signatures came from Humboldt County, which is a hotbed of anti-vaccination sentiment. (That’s more signatures than were collected in San Francisco County, which boasts a population roughly six times that of Humboldt.)

According to the California Department of Public Health, Humboldt County has the second-lowest vaccination rate for incoming kindergartners of the state’s 58 counties, trailing only Nevada County. According to the statistics, only 75 percent of Humboldt’s incoming kindergartners for the 2014-2015 school year had all their required immunizations. The state average was 90 percent.

Some Humboldt schools reported incoming kindergarten classes in 2014 that had more unvaccinated students than vaccinated, according to a recent Los Angeles Times report. For example, just six of Whitethorn Elementary’s 11 kindergartners had all their immunizations; at Mattole Valley Charter School it was 26 of 64 kindergartners; Arcata’s Coastal Grove Charter School saw just 14 of 33 kindergartners up to date with their immunizations. Some school officials have expressed concern about what the new law — which will go into effect prior to the start of the 2016-2017 school year — will mean for enrollment numbers, the fear being some parents may pull their kids from school rather than vaccinate them.

Specifically, the new law will mandate that all children in K-12 schools (both public and private), licensed daycare facilities and pre-schools be up to date with the Centers for Disease Control’s recommended schedule for 10 vaccinations, including measles, mumps, pertussis, rubella, tetanus, diphtheria and hepatitis B. The law does carve out some exceptions for medical reasons, and also allows students with exemption letters on file at their school prior to Jan. 1, 2016 to continue enrollment until they enter the next grade span (ie, preschool, K-6 and 7-12).