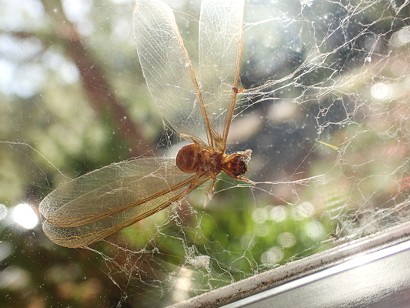 No one needs to tell us 2015 has been a dry year so far. Brown lawns, crops under stress, wild fire dangers all reveal our lack of recent rainfall. There is another group of organisms under stress as well. Although probably not high on any homeowner’s endangered species list, termites are facing a problem. Throughout a good year, a colony of termites grows in numbers and diversity. Birthing sterile workers and soldiers, the population builds. If the family is successful, late in the year it will produce fertile males and females. You can tell them by their dark bodies and wings. Every year for the last 250 million years or so they have awaited the autumn rains. When the ground is soft enough to dig into and establish a new colony they fly by the millions, select mates, shed their wings and dig in to establish a new colony.

Termites are a big deal. Some studies suggest that processing of wood by termites produces more greenhouse gasses than humankind. The insects themselves cannot actually digest cellulose. That task is performed by symbiotic organisms in their guts. Which is why the white workers shun sunlight. It kills those protozoans and bacteria, and quickly kills the host. While we homeowners may see them as a pernicious and destructive pests the rest of the world doesn't.

Their annual emigration has another implication. There are a great many species which harvest this areal bounty. Termites are the Thanksgiving feast of the insectivore clan. I would guess that our local swallows and bats receive a good portion of the fat stores that see them through the winter from this single energy rich source. You can see spider's webs festooned with the dusky winged carcasses. Finally, they feed their ancient enemies the ants. Ants and termites are no more closely related than a human and blue whale. (Ants are related to bees and wasps, while termites are most closely related to cockroaches.) Which is interesting since they have both arrived independently at a strikingly similar social structure — a classic example of parallel evolution. (Termites were here long before the ants showed up 90 million years ago.)

One final factoid: The longest lived insect known to man is the termite queen, at least one of which has been recorded to reach 50 years old. Even in the insect world, it's good to be the queen!