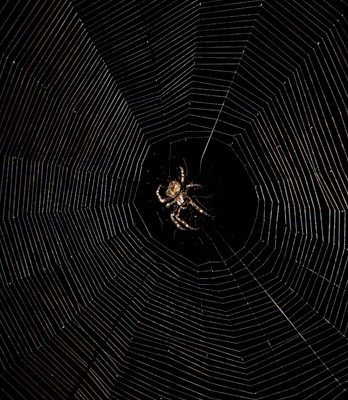 In the Ancient Greek story of Arachne, the protagonist, a beautiful young lady with amazing skill at weaving, challenges the goddess of the hearth, Athena, to a contest. Athena creates a godly tapestry while Arachne weaves a panorama of the follies of the gods (the ancient Greek gods had their share). In her fury at a mortal mocking the gods, Athena puts a curse on the human. Her body is shrunken and twisted into a frightening shape. Limbs are added and she is forever cursed to weave. Thus was created the spider, endlessly weaving her web. Also this is where the order's name comes from, Araneae. 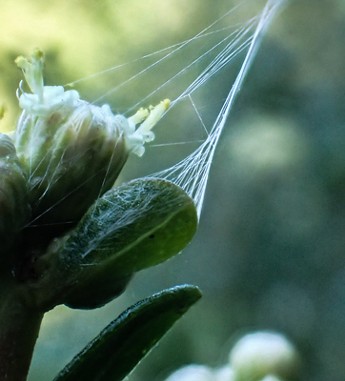 Along the side of the gravel road in a Greasewood (ceanothus) bush I noticed an apparently messy spider web. Having not much else to do I investigated. I saw something new to me. Hidden in the messy web was a neat orb. I suspected I was seeing a combination of the creations of two separate spiders, perhaps one having abandoned its home or been eaten by the weaver of the other. Most interesting to me were the anchor points of the main support cables for the messy part. Maybe 50 minute strands were attached to a leaf and combined into a single cable which, when it approached the mass was again, unraveled and parceled out to various parts of the mess. It made a fascinating curve, and resembled images from a documentary on rope making I had seen years ago. 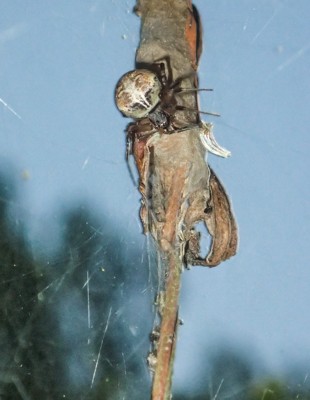 Curiosity being my own personal demon I had to know more. Fortunately, I found the information in The Field Guide to the Spiders of the California Coast and The Pacific Coast of the United States. Not a combination at all, this was the work of a member of the genus Meteperia which spins an orb, a messy, irregular web and a central shelter for itself. Browsing further in the book I found another web form which I had photographed some time before but never got a look at its maker. An inverted cone (I am careful to not say “funnel web” which is a dangerous Australian species), it was most likely made by genus Calymmaria.

While not all spiders build impressive webs, to the best of my knowledge they can all make silk and use it for various purposes, like egg sacks and shelters. Some babies spin long strands which catch the wind and carry them far away from their birthplace, dispersal behavior called “ballooning.” Some spiders that do spin webs actually use several different formulations making some strands especially strong, some which can yield absorbing shock like an aircraft carrier's arresting gear, and some specifically sticky for prey adhesion.

Funny, no one makes offerings to Athena any more, but the children of Arachne and her amazing tapestries are still with us.