Probably the insect's world epitome of elegant lethality is the praying mantis. There are even a couple of branches of Kung-fu based on the mantis' movements. Increasingly over the years I have seen adults of the 3- to 4-inch European mantis (Mantis religiosa) variety in the fall. They come in two different colors, pale green and pale tan often from the same brood. This species is easy to recognize by the black bull's eye on its upper front leg. As its common name points out, it is an import. 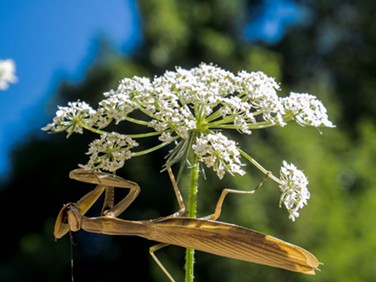 In the spring you can buy egg cases in local garden supply stores.
When considering them as a biocontrol in your garden you have to remember they are indiscriminate killers. They hunt whatever moves regardless whether it is good or bad for us, eating honeybees and leaf chafers with equal relish. While an egg case may hatch out 500 or more juveniles, few are likely to hang around to adulthood in your berry patch, and they are cannibalistic. Like the famous black widow spider, the females are known to eat their mates.

There is a harsh logic to it. Once the male has mated he is no longer important to his own heritage, so the nutritional value locked up in his body is the greatest thing he has left to contribute to future generations. The female does not consume the male 100 percent of the time, and researchers differ on the percentages. But they don't just eat each other after mating. Not too long ago I happened on two mature females “doing lunch.” Damage to the victor's wings indicates it was not a sudden ambush but a real fight. All I got to witness was the victor cleaning up the evidence.

Twice now I have seen adult mantises in the vicinity of the webs of the black and yellow Agriope spiders. This is a formidably large spider which sits in the middle of a stoutly made orb web. I assumed if there was any altercation between the two the web and the spider's venom would give it the advantage. And twice I have returned the next day only to find the mantis still there and the web abandoned and in disarray. I can't say for sure the mantis ate the spider in each case, but two out of two is a pretty good coincidence.