Fight night is returning to Trinidad on Nov. 14, but likely without the sanctioning and oversight that were put in place following a catastrophic injury in April of 2014, which left fighter Steve Watts paralyzed.

Cher-Ae Heights Casino has hosted two nights of mixed martial arts and amateur boxing in the year and half since Watts fractured his C-4 vertebrae and damaged his spinal cord trying to take down an opponent, both of which were sanctioned and regulated by the International Sport Combat Federation, a company that oversees fights throughout the country. But some changes at the California State Athletic Commission have forced ISCF to bow out of the Nov. 14 event.

Neither Cher-Ae Heights Casino nor Don Arnott, the fight promoter, responded to phone calls and emails seeking comment for this story, so it’s unclear if they plan to get the “So You Wanna Fight” event sanctioned. The only other sanctioning organization recognized by the state told the Journal it has not been contacted about being involved in the Nov. 14 fight night.

The semi-annual event was known as So You Wanna Fight Cuz You Think You’re Tuff for years prior to Watts’ injury and then underwent a rebranding as SYWF Presents: Quest for the Title. It’s now reverted back to its original name. 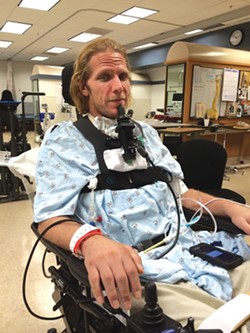 Watts’ injury thrust the event’s safety protocols into the spotlight, with witnesses telling the Journal there were no emergency medical personnel standing by to care for the injured fighter and that a group of bystanders (reportedly off-duty paramedics) stepped into the ring to administer first aid. Additionally, there was no ambulance on site the night Watts was injured, leaving him to wait about 20 minutes for one to arrive at the casino.

When ISCF was brought in to sanction the fight, it required that Arnott bring on a ringside physician, a minimum of one paramedic and one emergency medical technician, as well as an ambulance standing by, parked either inside the building or directly outside. ISCF also holds its sanctioned promoters liable for any medical costs sustained by an injured fighter, requiring promoters to secure a minimum of $2,500 in fighter medical insurance. (No such insurance was in place when Watts was hurt and, having signed a liability waiver, Watts is bearing the full cost of his medical expenses.)

Additionally, ISCF President Steve Fossum said his crew did thorough background investigations on every participating fighter to make sure they were true amateurs and had the skills necessary to compete safely. The sanctioning body also required potential fighters to go through full physicals from a licensed physician and pass blood tests prior to competing.

But Fossum said ISCF was recently informed by the California State Athletic Commission that it could no longer sanction amateur competitions on tribal lands without jeopardizing its standing as the commission’s delegate for amateur kickboxing in the state.

State Athletic Commissioner Andy Foster told the Journal that, under state law, the commission has the power to delegate certain responsibilities to outside entities that “meet or exceed the commission’s standards.” It has elected to do that for amateur combat sports in the state, tapping USA Boxing to sanction boxing events, the International Kickboxing Federation (ISCF’s sister company) to oversee kickboxing and Muay Thai events and California Amateur Mixed Martial Arts Organization (CAMO) to sanction mixed martial arts events.

Under state law, amateur fights in California must be sanctioned through the state commission. Those on sovereign tribal lands, however, are the exception and it’s up to the fights’ promoters to determine if they want the events sanctioned, and if so, what company they want to hire.

But Foster said the commission felt the situation was getting unwieldy, with its delegates vying against one another for business on tribal lands. “The commission determined they didn’t want the various entities basically in competition with each other,” Foster said. “It makes it too difficult to track who’s doing what.”

Consequently, Fossum said he contacted Arnott and told him ISFC had to step away. “They wanted us to sanction it,” he said. “They were happy with what we did. But it’s not our decision to make anymore, is what it comes down to.”

Where this leaves So You Wanna Fight is unclear. CAMO President J.T. Steele said neither Arnott nor anyone from Cher-Ae Heights Casino have reached out to his company about sanctioning the event. Steele said he’d love to add the Trinidad event to the list of 150 to 200 fights it sanctions ever year, but added that with every passing day it would become more difficult and expensive to sanction the rapidly approaching fight night.

And Foster expressed some concern about whether CAMO would be able to do it anyway, noting that So You Wanna Fight’s tough man boxing, which pits amateurs against one another in an elimination tournament, is dangerous and against commission rules.

Meanwhile, the So You Wanna Fight website continues to prominently display the ISCF and IKF logos, which could give the impression that they are still involved in the event. Mad River Ambulance is under contract to provide EMT and ambulance service for the event, as it has the last two. But it’s unclear what other of ISCF’s safety measures will remain without an official sanctioning body looking over Arnott’s shoulder.