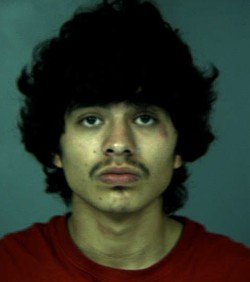 Three days after a 52-year-old man was found bleeding to death of multiple stab wounds in front of his apartment, the Arcata Police Department believes it has cracked the case and, this morning, announced the arrest of an 18-year-old Hoopa man.

On Sunday evening, police were called to the Courtyard Circle apartments in Valley West and arrived to find Anthony Michael Pennucci lying in front of his apartment, bleeding from fatal stab wounds. Initially, detectives didn’t have much to work with, according to Police Chief Tom Chapman.

“Like most investigations, it’s just a lot of hard work, knocking on doors, talking to people, putting together the pieces of a puzzle — some of the pieces are broken, some of them are backwards and some of them are ripped, but you just do the best you can to piece them together,” Chapman said.

Through witness interviews and some grainy video footage pulled from the property, detectives started to zero in on Richard Villa Dean as a potential suspect, having learned that Dean had a “loose connection” to an apartment near Pennucci’s and that he may have been on the property around the time of the stabbing.

Chapman said the department asked the Sheriff’s Office to look for Dean in the Hoopa area and bring him in for questioning. But, Chapman said, detectives didn’t have enough probable cause at that point to arrest him. Last night, Chapman said, deputies spotted Dean and attempted to contact him in Hoopa but the teen fled and “threw something” at a patrol car, damaging it. When deputies finally apprehended Dean, they took him into custody on suspicion of vandalism, resisting arrest and making threats to an officer. With Dean in custody, detectives then secured a search warrant for the property Dean was staying at in Hoopa.

During the search, they found Pennucci’s wallet and car keys and “clothing items that (Dean) appeared to be wearing at the time of the homicide,” Chapman said. With that, they had enough to seek a murder charge.

But Chapman said there’s still plenty left to investigate: The alleged murder weapon is still missing and detectives still haven’t figured out a motive for the slaying.

“Our impression is that robbery wasn’t the motivating factor, but property was taken,” Chapman said, adding that Pennucci’s car was found parked near his apartment. “I don’t know that we’ll ever satisfactorily resolve that question.”

Chapman said it appears the entirety of the stabbing took place inside Pennucci’s apartment, where he lived alone. After the altercation, Pennucci collapsed outside on a sidewalk, where someone saw him and called 911.

APD is asking anyone with information about the homicide to call 822-2428. See the department’s full press release copied below:

On October 25, 2015 the Arcata Police Department began a homicide investigation into the stabbing death of an Arcata resident.

52-year-old Anthony Michael Pennucci was found outside of his apartment at Courtyard Circle, severely injured from multiple stab wounds. Mr. Pennucci later died at Mad River Hospital as a result of the stab wounds.

Today, 18-year-old Richard Villa Dean of Hoopa, was booked at the Humboldt County Correctional Facility on suspicion of murder. Mr. Dean was taken into custody in Hoopa yesterday evening on unrelated charges by the Humboldt County Sheriff's Department.

Arcata Police Chief Tom Chapman said, "Our initial investigation shows no connection between Mr. Pennucci and Mr. Dean. We are continuing our investigation to determine a possible motive and locate the murder weapon."

Anyone with information about this incident should call the Arcata Police Department at 822-2428.