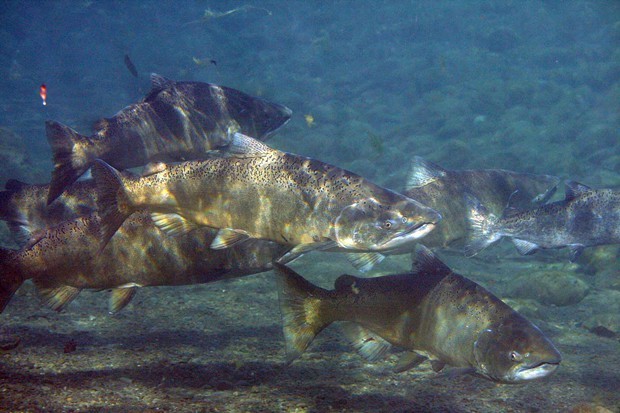 The Nature Conservancy recently released its second annual report showing the "big picture" of yearly California salmon runs. A collaborative effort between the California Department of Fish and Wildlife, the National Marine Fisheries Service and several other conservation groups, the report includes a database of salmon counts for Coho, Chinook and steelhead returning to spawn in 2013.

The conservancy counted an overall increase of 25,000 in total salmon population from 2012. Despite these encouraging increases, the number of wild salmon in our region are far below target population numbers. Target population numbers are determined by the National Oceanic and Atmospheric Administration, and population estimates are done by the California Department of Fish and Wildlife.

Redwood Creek saw less than a quarter of returning coho necessary to take the fish off the endangered species list (705 vs. 4,900). In the Humboldt Bay Tributaries watershed, of which only the salmon population in Freshwater Creek was estimated, researchers counted only 155 Coho (with 2,300 needed in the creek), 127 steelhead (1,500 needed), and no Chinook. The middle/upper Klamath River watershed had 19,405 spawning Chinook salmon. The Mattole River watershed saw just 14 Coho, 1,799 Chinook and 328 steelhead.

Despite these low numbers, Lisa Hulette, senior project director of the Conservancy's salmon program, said there is cause for cautious optimism.

"It does look kind of grim, especially if you look at Humboldt Bay Tributaries," she said. "Coho in particular are struggling, but there are some increases in some areas. Coho are on the brink, but they’re not gone. Chinook and steelhead are a little more resilient. If we are to follow the trend, next year we should see an increase."

The Nature Conservancy also features a drought dashboard with data from the U.S. Geographical Survey Waterwatch, which compares current flow gauges against historic data. Redwood Creek, Bull Creek and Mad River are all flowing at below normal. The Mattole, Eel and Van Duzen rivers are rated as "much below normal." This is in keeping with the statewide trend, which shows that 60 percent of California rivers are flowing at below normal rates, including four percent that have reached historic lows.

Predictions of a stormy "El Niño" winter, which should bring some rain, do not mean an end to California's historic drought, according to NOAA. And the warm waters of an El Niño year may also mean insufficient food for salmon, reducing their numbers further.

Salmon fans can get a glimpse of our gilled friends using this live Salmon Cam, due to be updated soon with footage of Chinook spawning in the Shasta River.