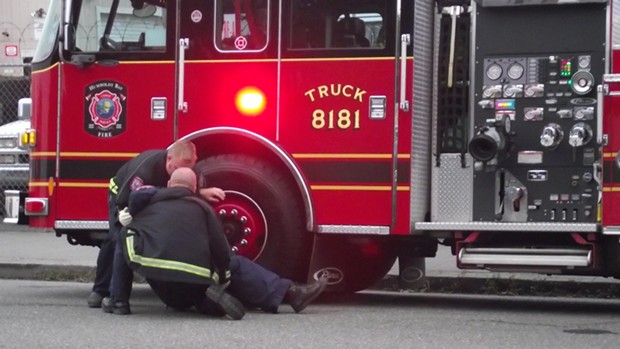 Multiple local police agencies are investigating an officer-involved shooting that left an officer wounded and a suspect dead in Eureka this afternoon.

Eureka Police Chief Andrew Mills said at a press conference — audio of which can be found here and here — that a California Highway Patrol Officer initiated a traffic stop near the 300 block of Q Street and that one of the suspects in the car exited the vehicle and opened fire on the officer with a handgun. The officer was hit and fell to the ground, Mills said, where he returned fire and wounded the suspect, who later died at a local hospital.


Though wounded and on the ground, the officer was able to keep his weapon trained on the car and its remaining passengers, holding them there until backup arrived, Mills said.

One report indicates the officer was shot in the leg, but that has not been confirmed. A press release from Capt. Steve Watson confirms this. 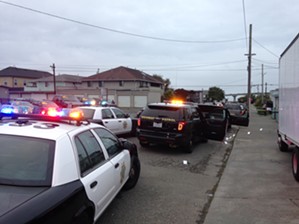 The shooting death is the 14th homicide in Humboldt County in 2015. Last year, the county recorded 16 killings, its highest total in at least 30 years.

On Sunday, 11/01/15, at about 4:19 PM, Eureka Police Department officers were dispatched to the vicinity of 4th and ‘Q’ Streets to assist a California Highway Patrol officer who had just been shot during a traffic stop. Officers from other local agencies responded to assist as well.

Upon arrival, officers observed an adult male down in the roadway next to the driver’s door of an older model, green two-door sedan. The suspect’s vehicle was stopped facing northbound on ‘Q’ Street between 3rd and 4th Streets with the CHP unit behind it. The CHP officer, who had been shot in the leg, was at his vehicle holding the remaining 4 passengers in the sedan at gunpoint.

EPD officers evacuated the wounded CHP officer back to a position of cover and then detained the occupants of the suspect’s vehicle one at a time at gunpoint.

Once the area was secured, emergency medical personnel summoned to the scene began rendering aid to the officer and suspect. Both were transported to a local hospital by ambulance where the suspect was later pronounced deceased. The officer sustained a non-life threatening gunshot wound and is expected to survive.

4th Street has been shut down to all westbound traffic at ‘R’ Street as investigators work through the night to process the scene. ‘Q’ Street has also been closed to traffic between 3rd Street and Myrtle Avenue.