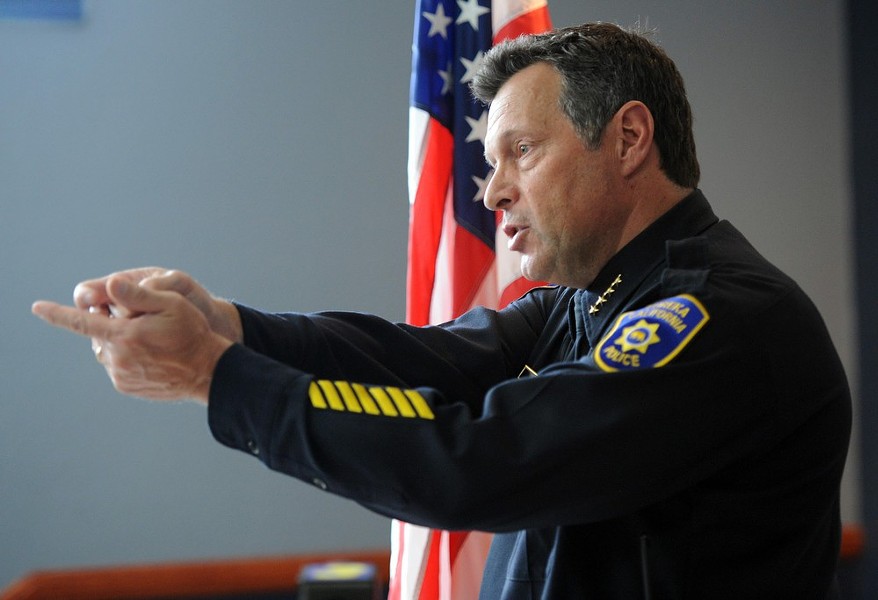 Eureka Police Chief Andy Mills has pulled his proposed gun control ordinance, saying his department is going to focus on an education campaign urging people not to leave weapons unattended in their homes and businesses.

Mills, with guidance from the city attorney, had developed a proposed ordinance requiring gun owners to lock up their firearms when they were away from home or work. It was a response, he said at last night’s city council meeting, to gun thefts and gun violence.

“When we have a city of 30,000 people and we have eight homicides since I’ve been here, that’s unacceptable,” Mills told the council.

Mills rattled off a series of anecdotes about gun thefts in the area in the last year: 50 guns were stolen from a business, four of which have been recovered with criminals; 40 guns were piled up at another business before police officers interrupted the burglary; at a Eureka residence, 40 more guns were collected when police intervened; a Eureka resident returned home to have his own shotgun pointed at him by an intruder.

In another incident, a homeowner interrupted a gun burglary. “Fortunately he'd been duck hunting, so he chased [the burglar] down the street and fired a round at him,” Mills said. “And bully for him.”

Mills said 122 guns have been taken from criminals in the last year, 16 of them at the PalCo Marsh. He said he wants to get guns out of the hands of criminals, but he says he’s not interested in impinging on 2nd Amendment rights.

“People have the right to bear arms but that’s just the point — to bear arms. Not to leave them lying around unprotected,” Mills said. “[The ordinance was] written specifically so if someone is home or at their business, they can have all the guns they want lying about, because they're in control of their firearms. It has nothing to do with ‘when somebody goes to bed at night, can they have a gun on their nightstand?’ Of course they can. This is America.”

Mills said he pulled the ordinance based on feedback from the city council and the public. Commenters on his blog post (and the Journal website) announcing the ordinance were uniformly against the restriction, though they also uniformly seemed to misunderstand that Mills’ ordinance would only require guns to be locked up when the owner wasn’t present.

On a poll on Mills’ blog, 33 percent of respondents voted to “Lock up the guns” and 25 percent said to “Leave them unattended.”

Forty-two percent of respondents chose the third option — “Other solution(s).”

Mills seemed to respond to that in his address to the council. “I welcome anybody from our community — anybody or any organization who is interested in finding better solutions than what we’ve suggested. I’m wide open. If somebody wants to come in and sit down and say, ‘You know what? This might be a better idea, Andy,’ then I’m all about it. But I want us to prevent gun violence.”

Mills said EPD is offering free trigger locks for interested people, and urged local businesses to offer discounts for gun safes. Councilwoman Marian Brady raised doubts that trigger locks would prevent criminals from stealing guns, saying that people have repeatedly cut through a chain link fence at a carpet store near the PalCo Marsh. Mills responded that any deterrent, no matter how slight, is an improvement — though he’d rather see guns put in safes or hidden panels when owners are away.

Mills — who is scheduled to host a press conference this afternoon about a shootout on Sunday that left a CHP officer wounded and a suspect dead — said he’ll reintroduce the ordinance if appears the EPD’s education efforts aren’t effective.

“We are markedly less safe when criminals find it easy to steal guns,” he said.