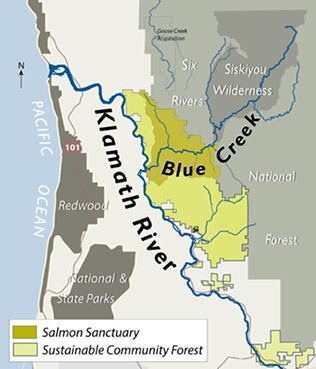 The Western Rivers Conservancy has launched an ambitious crowdfunding campaign to purchase a 10,000-acre tract of of land that contains a significant Klamath River tributary.

Blue Creek runs into the Klamath River 16 miles inland from the Pacific Ocean, just inside Humboldt County's border before the river flows into Del Norte County past the town of Klamath. Blue Creek provides a crucial cold water injection, the conservancy says, and its proximity to the ocean makes it important for salmon as they head upstream to begin their spawning season.

The Yurok Tribe has been buying up Green Diamond land in the Blue Creek watershed for years, working with the conservancy to get funding from a variety of public and private sources. The Western Rivers Conservancy hopes to raise $5 million in its IndieGoGo campaign to buy the last piece of the 47,000-acre land acquisition and turn it over to the Yurok Tribe for management. (Western Rivers Conservancy communications director Danny Palmerlee clarified to the Journal this afternoon that the total cost of the 10,000 acres is $16 million — the group is only trying to raise $5 million through crowdfunding.) The campaign had raised just over $15,000 as of this afternoon, with 51 days left to raise funds.

If nothing else, you can enjoy this lovely, scenic video of the Klamath River and Blue Creek compiled for the fundraiser.

Editor's note: This post was updated with a clarification about the total cost of the remaining Blue Creek land purchase.