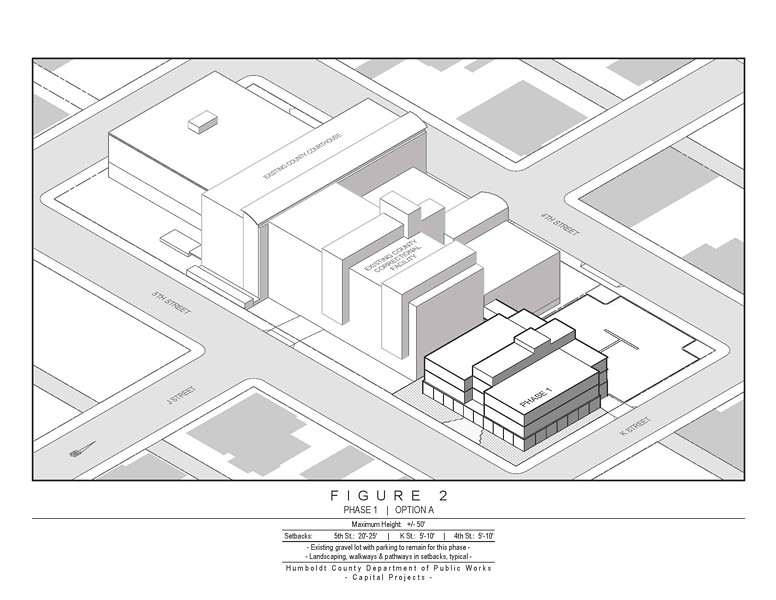 Humboldt County Sheriff Mike Downey announced yesterday that the state has approved a $20 million funding request to build a multi-use addition onto the county jail that officials hope will revolutionize offender rehabilitation locally.

The funding will be matched with $1.5 million from the county to build a three-story structure on the gravel lot adjacent to the jail that will include additional bed space for the jail and a one-stop-shop for probation and mental health services. The idea, Downey explained, is to consolidate re-entry services under one roof to create a warm handoff from incarceration to post-release services.

“(Inmates) will have all the services they need to make that transition from being an inmate here to being released and no longer in custody,” Downey said.

Humboldt County Probation Division Director Shaun Brenneman said the plan is to transition his department’s day reporting center on Fourth Street into the new facility, which would allow probation officers to form relationships with inmates while they are still in custody, relationships that can then be maintained once an inmate is released back into the community. Currently, offenders are released and asked to report to the probation day center to meet their probation officer for the first time. Some never make it the two blocks.

Studies have shown that gaps in services can greatly increase someone’s risk of reoffending, and Brenneman said the new facility is designed to eliminate those gaps.

“Re-entry services are a crucial missing link to local services,” he said, adding that the new facility is designed to full that void and make sure released inmates have all the tools needed for a successful transition. “Hopefully, they’ll be going back into the community with a running start and they’ll be successful.”

In many ways, Downey said the state funding — made possible through Senate Bill 863, which earmarked $500 million to fund new adult criminal justice facilities throughout the state — is a part of the ongoing fallout from Assembly Bill 109, the state’s prison realignment bill signed into law in 2011. The law aimed to reduce prison overcrowding by pushing low-level offenders back to county jails, essentially forcing local agencies and governments to create solutions to reduce recidivism rates.

In addition to better preparing inmates to transition to life on the outside, officials said it will also allow for a more robust mental health services delivery in the jail. Currently, space limitations hamper mental health staff’s ability to confer with inmates and set up a permanent space in the jail, which has seen a dozen inmates attempt suicide this year. The three-story facility will also feature a parking garage on the bottom floor and an additional 44 jail beds on the top floor.

Downey said he’s hoping the facility will be up and running within five years, and will require the hiring of an additional 15 to 20 correctional officers to staff it. County Administrative Officer Phillip Smith-Hanes said the county is cognizant of this looming personnel expense and has worked it into the county’s five-year financial plan.

Smith-Hanes said he expects the board of supervisors to officially accept the state funding award in the coming weeks.