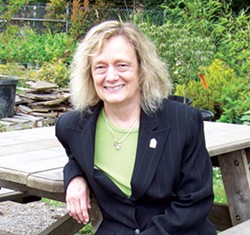 Rossbacher’s letter states that two black female students were in the downtown area when two unidentified white men in a truck threw a beer bottle at them, spraying them both with beer, before continuing to “taunt, harass and chase them.” The students escaped the situation safely, according to Rossbacher’s letter.

“And we know this is not the first time that an incident like this has happened on campus or in the community,” Rossbacher writes. “Harassment based on race, gender, or other characteristics continues to be a serious problem.”

Arcata Police Chief Tom Chapman said the incident referenced by Rossbacher was never reported to his department, and he didn’t learn of it until the president’s letter went public this evening. Chapman said he plans to connect with campus officials Monday to follow up on the letter and learn more about the incident.

Under California law, the incident Rossbacher describes could be classified as a hate crime if it can be proven the assault on the two women was motivated by their race or ethnicity.

Rossbacher’s letter calls on its readers to “be a part of the solution,” and notes that the alleged act was “antithetical” to HSU’s values. Read the full letter copied below.

Dear University Community:
On Friday night, November 6, two black women who are HSU students were assaulted in downtown Arcata. Two unidentified white men threw a glass bottle at them, hitting them and spraying both women with beer. From their truck, the men then proceeded to taunt, harass, and chase them. Both students ran and successfully evaded the assailants.
The students are clear that this was not only a physical assault, but a racially motivated one. And we know this is not the first time that an incident like this has happened on campus or in the community. Harassment based on race, gender, or other characteristics continues to be a serious problem.
Incidents such as these are both shocking and appalling. They undermine our shared commitment to create a safe environment for learning, teaching, and living for our entire University community. We are all affected by what happens in the community around campus.
I call upon all members of the University and the broader community to be part of the solution. We need to understand that such acts are traumatic, as they diminish the survivors’ sense of safety. Furthermore, these acts impact survivors’ ability to live, study, and work in our community.
These acts are also antithetical to the values we hold as an institution, including our shared commitment to supporting the dignity of all individuals, to valuing diversity, and to respecting differences.
Each of us can play a role in supporting members of our community who experience harm, including listening compassionately and bridging them to resources such as Counseling and Psychological Services, our Bias Education Initiative, the Dean of Students, the Centers for Academic Excellence, and other allies across campus.
I hope you will all play a role in making our University and the broader community safe, welcoming, respectful, and free of violence, prejudice, and oppression.
Sincerely,
Lisa A. Rossbacher, Ph.D.
President