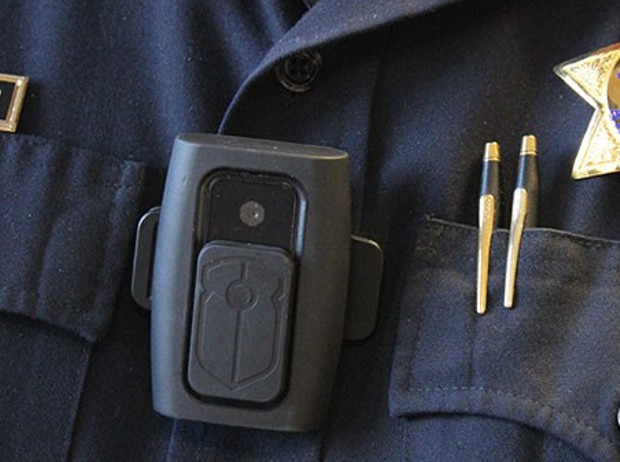 Prior to last night’s vote, Eureka Police Department Capt. Brian Stephens briefed the council on the departments’ proposal, as well as the rough outline of a draft policy the department is working on to govern officer’s use of the new technology. Stephens made clear the department sees the cameras primarily as an evidence gathering tool.

After the presentation, Councilmember Melinda Ciarabellini asked Stephens if the camera footage would be subject to the California Public Records Act. He was unequivocal that the department’s stance is that it will not, saying that “every video could be evidence,” either in criminal prosecutions or internal affairs investigations.

PREVIOUSLY:
The Eureka Police Department is moving forward with plans to outfit its officers with body-worn cameras, and will be asking the city council Tuesday to approve a $60,000 purchase to that end.

Specifically, EPD is asking the council to approve the purchase of 40 Watch Guard HD body-worn cameras, with the hopes of deploying them in the field early next year. A policy governing how the cameras are to be used — when officers will be required to turn them on and off, and how the footage is to be stored and handled — is still in draft form, according to Capt. Brian Stephens, but should be finalized soon.

The department did 60-day field tests of a couple different body camera models beginning back in July, but ultimately selected the Watch Guard HD model because its software and storage systems align with the Watch Guard dash cameras outfitted in EPD patrol cars.

EPD would be the third local department to fully deploy dash cameras, as Rio Dell outfitted its four officers with the technology back in June and Ferndale has had its officers using the cameras for several years now. The Arcata Police Department has also been testing the cameras in the field.

In its staff report to the council, EPD notes that the cameras are an “evidence collection tool that will assist with many aspects of policing.” Additionally, the report states that the cameras “will help strengthen accountability and add transparency.” It’s worth noting, however, that it’s entirely unclear what — if any — footage taken from the cameras will be released to the public. The city is currently appealing a superior court decision to release an EPD dash camera video of a December 2012 arrest, arguing it should be considered a “confidential police officer personnel record” because one of the arresting officers was accused of excessive force. (Charges against him were later dismissed).

For more on the proposal coming before the council Tuesday, see the city staff report here. There's a bit more detail about the specifics of EPD's draft policy here. And, for more information about police-worn body cameras in general, see “Camera Questions,” the Journal’s March 19 cover story, here.