2nd UPDATE:
The Sequoia Park Zoo is looking for volunteers to join a search party that’s going to set out tomorrow to find Masala, the 18-month-old red panda that escaped from its zoo enclosure Thursday.

In a press release, the zoo asked that volunteers show up tomorrow at 8:30 or 10 a.m. at the zoo entrance to join the search. Additionally, officials are asking for the public’s help in keeping eyes open and cell phones at the ready, believing a solid tip as to the animal’s location is all that stands between her and a homecoming.


For more information, see the full press release below:

Red pandas are small raccoon-like mammals, the size of a large domestic cat, wild, and they eat bamboo.
Staff and volunteers are searching for her, but because of safety concerns, volunteers will not continue the search in the dark, although will continue throughout the night.
Red pandas can be active after dusk and at night so please keep a look out, especially if you have bamboo growing in your garden. And remember, drive carefully.

We are relying on the public to help us locate her – by keeping eyes open and cell phones at the ready. Please don’t just post sightings on facebook.
Call this number immediately: 707-499-3668.

If you would like to volunteer to help find her, come to the zoo at 8:30 am and 10 am on Saturday to join the search.

1st UPDATE:
Sequoia Park Zoo Manager Gretchen Ziegler reports there have been no additional sightings of Masala — the young red panda that escaped from the zoo yesterday — since last night.

Ziegler said zoo and city staff continue to search for the small raccoon-like mammal in an area southwest of the zoo, near Campton Road, where its last sighting was reported. But, Ziegler said she’s very hopeful that a fresh lead will come in on the hotline — 499-3668 — soon with the wayward animal’s whereabouts. “That’s going to be our key for finding her,” Ziegler said, adding that she’s hopeful the public will help by keeping eyes open and cell phones at the ready.

PREVIOUSLY:
The search continues this morning for Masala, the year-and-a-half old red panda that escaped from the Sequoia Park Zoo early yesterday afternoon.

Zoo Manager Gretchen Ziegler said zookeepers and city staff spent all of last night “bushwhacking the gullies” and canvassing the areas surrounding the zoo for the wayward critter. Several citizens called in Masala sightings, Ziegler said, but none were confirmed. One of those sightings had Marsala crossing Campton Road, and Ziegler said officials believe the arboreal mama is traveling southwesterly and has probably covered between a quarter- and half-mile of terrain since its escape between 11 a.m. and 2 p.m. yesterday.

“She should be getting pretty hungry for bamboo right now,” Ziegler said, adding that there’s plenty of bamboo in the areas surrounding the zoo and it’s possible Masala has found some patches to munch.

At about 9:15 this morning, a CalFire truck was parked in front of the zoo and Ziegler said officials were meeting and regrouping before heading out on a targeted search shortly. She asked that members of the public keep their eyes peeled for the fluffy, red raccoon-like animal and call 499-3668 as soon as possible after a sighting. Ziegler reminded that the animal is not a danger to humans.

Ziegler said she's confident that once officials are able to pin down Masala's location, zoo staff will be able to coax her to them with some bamboo. Around 9 a.m. this morning, a portable kennel sat near a zoo office, with several stocks of bamboo and an oversized net leaning against the outer wall.

It remains unclear how Masala escaped, but Ziegler said the zoo's other four red pandas are safe and sound in their enclosure. We’ll update this post with additional information as we receive it. 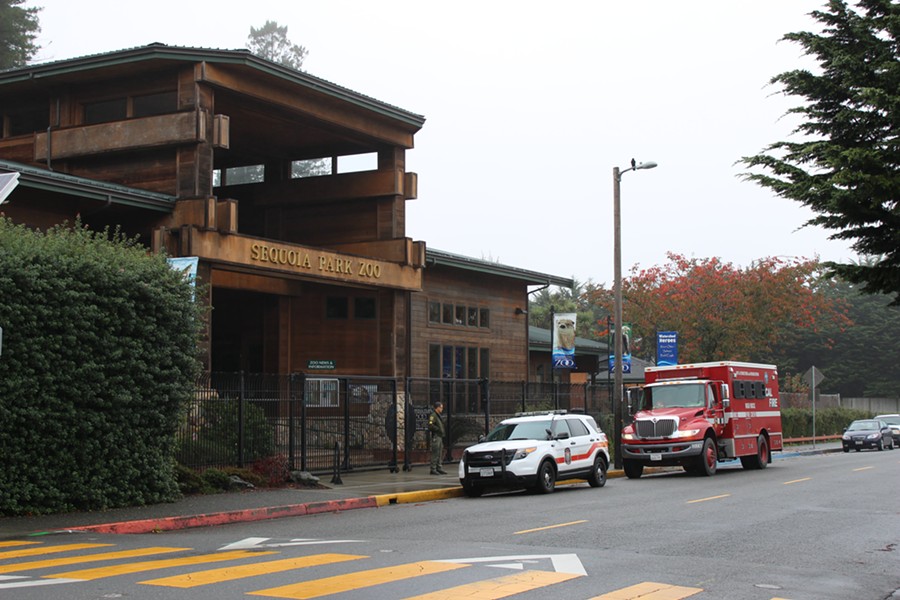