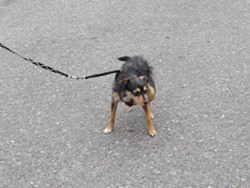 A few weeks ago, while scrolling through Facebook to research our article on digilantism, we ran across a passionate comment from a Hammond Trail hiker whose pup had been "poisoned" by eating human poop.

"Later that afternoon my dog almost died. Vet took samples of what my dog threw up and her diarrhea...Found mushrooms and pot. My vet said if it had been heroin laced feces it would have been fatal for dogs. The Vet said they are seeing 2 to 3 dogs per week that have been "poisoned" by ingesting drug laced human feces out on local beaches and trails."

At first, we scoffed. But then New York Magazine came out with an article about dogs potentially getting sick from eating heroin-laced poop in Prospect Park. Their source? A canine advocacy group, with a link back to an article in the always-dubious Daily Mail. The chances of this being accurate still seemed slim, but we're never one to pass over weird news. So we made a few calls.

None of the vets or animal rescue groups we called (five in all) had any idea what we were talking about. Dr. Breeann Flores, a veterinarian with Broadway Animal Hospital, was kind enough to check in with some of her colleagues and thank us for such an interesting email.

"Both Dr. Tavares and I have not treated a dog for toxicity secondary to narcotics present in human feces," she wrote. "There are many toxins, mainly dogs and sometimes cats, will ingest that can have similar signs those articles were describing such as marijuana, Xylitol in chewing gum, bakers chocolate, coffee and rat poison."

So, while you should definitely keep an eye on your dogs and not let them eat human feces (and lick your face afterward), rumors of a poop-poisoning epidemic seem unsubstantiated. So, did we spend a week calling around vet's offices and asking weird poop questions only to turn up non-news? Well ... that whole thing about the pot is worth a PSA, because it seems as though marijuana poisoning is a major problem for Humboldt County pets.

According to Katie Benson over at the Sunny Brae Animal Clinic, they do see a lot of animals who are sick with marijuana toxicity. The animals may have eaten their owner's stash, munched on a live plant, a roach or edibles.

"They act drunk, have a low heart rate, low temperature, are hypertonic, have seizures," she said. Sometimes they see as many as two to five animals a week suffering from marijuana toxicity.

...but wait! The American Society of the Prevention of Cruelty to Animals does list human feces as a potential source of marijuana toxicity. Dr. Tina Wismer, medical director at the ASPCA’s Animal Poison Control Center, said while they do occasionally get calls about dogs who fell ill after eating poop in public parks, far more cases involve animals who chowed down on adult diapers or colostomy bags.

Wismer added that she gets a lot of amazing phone calls through the ASPCA's Poison Control Hotline.

"People will call and say, 'I can't believe they ate that, it tastes so bad!' But dogs will eat just about anything and everything. They’re kind of like toddlers, they explore with their mouth," she said.

So lock up your diapers and click on that leash. If you're pretty sure you stashed your stash in a place your pooch couldn't get it but he still needs to visit the vet, go ahead and blame his symptoms on a toker's trail biscuit.