Warren: Guilty on All Counts 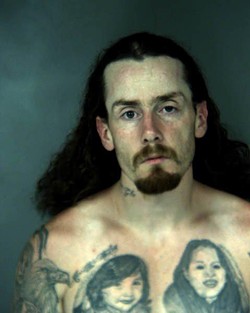 UPDATE:
After just a couple hours of deliberations, a Humboldt County jury convicted Jason Warren of all counts.

Family members of the victims wept and hugged at the conclusion of the hearing, which resolves the case more than three years after the murders.

Warren, clad in slacks and a dress shirt, with his black hair slicked back and braided in a pony tail, shook his head slightly as the first verdict was read but otherwise showed no emotion. Perhaps underscoring the case’s impact on the local community, the courtroom was packed to near capacity, with a number of notables attending, including District Attorney Maggie Fleming, Chief District Attorney Investigator Wayne Cox, Undersheriff Billy Honsal and Sheriff Mike Downey, who even held the door for jurors as they were brought into the courtroom.

Warren is due back in court Dec. 9 for a court trial on an unrelated matter. His sentencing date has not yet been set.


The jury of seven men and five women began deliberations shortly before 11 a.m. today, after hearing for the first time the defense’s view of the case. Warren’s attorney Glenn Brown, who opted not to give an opening argument in the case, addressed the jury directly this morning for the first time in the four-week-long trial.

Brown opened his closing argument in the case by conceding that special prosecutor Paul Sequeira — who was brought up from the Mendocino County District Attorney’s Office solely to convict Warren in this case — had, “with great skill and professionalism,” presented a lot of testimony and evidence in the case. Brown then proceeded to try to sprinkle doubt throughout.

Yesterday, jurors listened as Sequeira walked them through the prosecution’s theory of the case: That Warren tortured and murdered Dorothy Ulrich with a samurai sword in her Hoopa home at about 4:20 a.m. on Sept. 27, 2012 before taking a silver Kia sedan from her driveway, driving to the coast and running down three women out for an early-morning run on Old Arcata Road, killing Suzanne Seemann and seriously injuring Terri Vroman-Little and Jessica Hunt. Warren then ditched the Kia in a Eureka parking lot and hid out at a friend’s house nearby, according to prosecutors.


Three times jurors in the case heard an audio recording of Ulrich’s death — three minutes of percussive whacks mixed with Ulrich’s screams and pleadings for the perpetrator to stop — taken from a video surveillance system in her home. Early in his closing argument , Sequeira said he’d thought long and hard about whether to play the recording again.

“Quite frankly, as I looked at all your faces, I didn’t think you wanted to hear it again,” he told the jury. “I’m not going to play it again because it’s so disturbing.”

But Sequeira did methodically walk jurors through the recording — People’s Exhibit 152 — noting that investigators counted between 59 and 65 audible impacts. At one point, Sequeira held up a samurai sword similar to the one allegedly wielded by Warren that morning and whacked it against the podium, causing jurors and audience members to jump in their seats. “It’s disturbing in a courtroom and it makes us jump,” he said, “but can you imagine being there and living it?”

Sequeira then showed jurors pictures from Ulrich’s autopsy, pointing out that the vast majority of wounds were to the back of her body. Her hands and forearms were extensively bruised, probably because she’d been trying to protect her head during the attack, he said. Some of Ulrich’s wounds were shallow, which was probably intentional, he said, to inflict maximum pain and prolong her suffering.

Sequeira talked about how Warren had laid in wait and, after spending 18 hours with Ulrich, helping her pack up her house and install one of the aforementioned surveillance cameras, had chosen to attack her when she least expected it. He pointed out to jurors that the vast majority of the blood splattering found in Ulrich’s home was low to the ground, indicating the bulk of the gruesome attack occurred when she was lying down, most likely on her stomach. “The only thing she could do was cover her head and try to ward off the blows in the hopes it would stop,” Sequeira said. He pointed to Ulrich’s cries on the video, when she appears to call Warren by name, asking “Jason” to stop and asking him why he’s “doing this. ... With some of her last words," Sequeira said "… she told you who killed her.”

“The defendant had the ability to stop,” Sequeira continued. “What did he say? He said, ‘Shut up and be quiet.’”

The prosecutor also pointed to surveillance footage that appears to show Warren leaving Ulrich’s home shortly after the attack, holding her purse and a long, thin item. He pointed to stains of Ulrich’s blood found on Warren’s clothing after his arrest that seem to link him to her killing.

Sequeira then turned his attention to the alleged murder of Seemann and attempted murders of Hunt and Vroman Little, explaining that the evidence shows that Warren took the Kia from Ulrich’s driveway and drove it out to the coast. There, Sequeira said, Warren came across Seemann, Hunt and Vroman Little and intentionally ran them down from behind.

The three women were running northbound on the shoulder of the southbound lane, so they could see traffic as it approached them. They were all wearing headlamps and reflective clothing, Sequeira said. The impact of the collision was so strong, Sequeira said, that it sent the three woman’s bodies scattering, noting that one of Seemann’s shoes was found by a hay bail in a field adjacent to the road. The prosecutor pointed out that investigators didn’t find a single skid mark at the scene, and there’s no indication that Kia braked or turned sharply either prior to or after impact with the runners.

Sequeira said there’s no question the Kia is the car that hit the three women, noting that debris at the scene and blood and hair samples taken from the exterior of the car all show conclusively that it was the vehicle that ran down the three women. And, Sequeira said, there’s scientific evidence pointing to Warren as the person who was driving it at the time, noting that glass fragments from the Kia’s windshield were found throughout Warren’s clothing and that Ulrich’s blood was found both on Warren’s left shoe and on the Kia’s driver’s side floor mat.

Brown began his closing argument this morning by thanking the jury and noting the horrific nature of the case. “This case is a tragic case in every sense that you can think of,” he said. “Anything that includes the loss of human life is tragic. Human life is precious.”

The seasoned and respected defense attorney’s closing was devoid of any bombastic courtroom theatrics or impassioned declarations of his client’s innocence. Rather, Brown calmly and methodically worked to subtly cast doubt on Sequeira's conclusions of the evidence in the case.

He noted that Ulrich and Warren met by happenstance at a local gas station the day before the murder, when she apparently asked him to come back to her house to help her with some things. He said it was curious that — while packing up her house, getting ready to leave and join her husband on a long road trip — Ulrich asked Warren to install another security camera on the outside of her house.

Brown also pointed out that there were blind spots in the cameras, noting that the back door to Ulrich’s home wasn’t captured by any of the houses’s four cameras. Brown told the jury to keep in mind video members had seen of the property in the hour or so leading up to Ulrich’s killing and that a neighbor’s dog can be seen barking and standing alert. He said he was pointing these things out to “rebut the idea that no one else could have” entered the home in the period prior to Ulrich’s death.

While blood stains that matched Ulrich were found on Warren’s clothes, Brown asked jurors to consider that the stains looked distinctly different then the blood spatter found throughout her home. This seems to indicate, Brown said, that Warren was in the house after Ulrich’s death but may not have been present for the slaying. Further, Brown said, one of the blood stains on Warren’s clothes was found to be a mix of two blood types — one was Ulrich’s but the other was not Warren’s. “Whose was it?” Brown asked.

Brown also took a minute to zero in on the state’s special allegation that Warren tortured Ulrich, noting that, by law, torture can only be considered if it was motivated by “revenge, extortion, persuasion or some sadistic reason.” It’s clear the first three don’t apply in this case, Brown said, adding that there’s also no evidence that whoever was inflicting Ulrich’s pain was deriving pleasure from it.

After the killing, Brown said it’s clear Warren leaves the residence and gets in the Kia. What’s unclear, the defense attorney said, is if someone else is with him and if Warren’s driving the sedan when it leaves Ulrich’s property. The evidence is clear that Warren knew Ulrich’s property had multiple surveillance cameras on it, so why, the defense attorney wondered aloud, would his client — if he’d been in the midst of a willful premeditated murder and was taking pains to dispose of the sword used in the killing, as prosecutors allege — not try to destroy the surveillance footage as well?

When it comes to Seemann’s death, Brown conceded the evidence seems to indicate Warren was in the Kia when the runners were hit. But, he said, there’s nothing to prove Warren was driving at the time, or, if he was, that he intended to run down the women.

Brown said a test of the Kia found one of its tires to be significantly under-inflated, which the defense attorney said caused the vehicle to pull left in field tests at 20 mph. At a higher rate of speed, this could have posed a problem, Brown said, especially for a “crummy” driver who hadn’t slept the night before.

Brown wrapped his closing argument by reiterating his gratitude to the jury in the case, and expressing his faith in the jury system. He asked jurors to be objective. “That’s really all I can ask you and I have all the confidence in the world that if you reach a verdict, your verdict will be a just one.”

In a brief rebuttal to Brown’s closing argument, Sequeira asked the jury not to speculate about mystery killers that might have been but to look at the evidence before it and use common sense.

He briefly pointed out that fibers from Warren’s jacket were found on the driver’s side of the Kia and that evidence indicates Warren actually passed by the runners as he traveled south on Old Arcata Road and then turned around in order to run them down in a “murderous rampage state of mind.” The whole case is “completely senseless,” Brown said.

“I’ve told you from the beginning, I can’t make sense of it,” he said, adding that Warren has had a good attorney, an attentive judge and a full trial designed to protect his rights. Now, Sequeira said, it was time for the jury to do its part. “Justice for Dorothy Ulrich, Suzanne Seemann, Jessica Hunt and Terry Vroman-Little is now in your hands.”

With that, after a few more instructions, the jury began deliberating.

For detailed, daily coverage of the case, check out Ryan Burns' reporting for the Lost Coast Outpost here.