Legislation is desperately needed to salvage the historic 2010 Klamath Basin Restoration Agreement, which saw diverse stakeholders come together in a compromise aimed at resolving the decades-long Klamath water crisis and restore beleaguered salmon runs. The agreement is set to expire in about a month, and many had given up hope that Congress would pass the legislation needed to move the agreement forward.

So you’d think news that someone in Congress has drafted legislation to enact the deal — after years of inaction — would be met locally with cheers and fist pumps.

“Unfortunately,” North Coast Congressman Jared Huffman said in a statement, “Congressman Walden’s draft conspicuously leaves out the dam removal that’s vital to river restoration — the centerpiece of the whole agreement for my constituents in California — and adds poison pills in the form of massive giveaways of public lands that were never part of the settlement.” 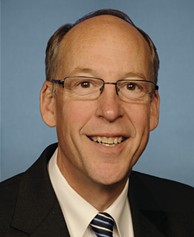 According to Walden’s summary of the legislation, the draft bill would “not authorize, fund or expedite federal dam removal,” and would instead leave that process to the Federal Energy Regulatory Commission. The draft would also transfer 100,000 acres of U.S. Forest Service land each to Klamath and Siskiyou counties to be “used for timber production to grow jobs in rural communities and improve forest health.”

While the topic of dam removal has long been a bit of a lightning rod in Congress, with some lawmakers fearing removal of the four Klamath dams could set a precedent for future removal projects, its absence from the draft legislation is a bit of a head scratcher. Just two months ago, Walden told the Herald and News that there were “no alternatives” to dam removal being a part of the deal.

“Personally, I’m not a dam removal support guy,” he told the Herald and News, according to an Oct. 15 story in the Associated Press. “But the facts that have been agreed to (in the pact) require (dam removal) and there are really no alternatives unless you want to blow the whole agreement apart and give up on water certainty for agriculture and all the other components that go with the agreement.”

It’s unclear where the idea came from to gift Klamath and Siskiyou counties a combined 200,000 acres of federal forest land. Though, it should be noted Klamath County is a part of Walden’s district.

The Karuk Tribe, which has been a staunch supporter of the KBRA, issued a press release Thursday saying Walden’s draft bill is “far off the mark.”

“Congressman Walden told us all that he understood that dam removal had to be part of the bill or else irrigators would face water uncertainty,” Karuk Councilman Josh Saxon said in the release. “The draft bill he released today leaves out dam removal and instead replaces it with a giveaway of public lands. Communities in the basin left partisanship at the door to hammer out a solution. Mr. Walden must do the same. If there is no dam deal, there is no dam deal.”

Walden is encouraging “all parties to review the proposal and let [him] know your feedback.” The full text of the draft can be found here, and Walden’s contact information can be found here.

Huffman said the “fundamentally flawed” discussion draft is a “discouraging sign for those of us who urgently want to make progress on Klamath River restoration,” but pledged to roll up his sleeves and continue a bipartisan effort to forge a “reasonable and responsible Klamath compromise. … But like many Klamath stakeholders, my patience is wearing thin.”

In the press release from the tribe, Karuk Chairman Russell “Buster” Attebery said Walden’s legacy rests on getting this legislation right. “There is no other solution to the Klamath crisis,” he said. “Greg Walden’s legacy is being forged right now and the next time there’s a fish kill or irrigation shut off, it will be no one’s fault but his.”

Read the full press releases below from the Walden, Huffman and the Karuk Tribe

Bill would provide water and power certainty for agriculture, boost economic development for rural communities and tribes
WASHINGTON, D.C. – After nearly a year of discussions with a broad range of parties in the Klamath Basin and key leaders in the U.S. Congress, U.S. Rep. Greg Walden today unveiled a draft of a bill that would help solve long-running water issues in the Basin.

“Throughout the year, I’ve worked closely with a broad range of stakeholders in the Klamath Basin as well as my colleagues in Congress to draft a viable plan that would help the Basin and the people who live there. This draft proposal would help provide water and power certainty for agriculture and boost economic development and job creation for rural communities and tribes through a transfer of federal timber lands. I encourage all parties to review the proposal and let me know your feedback,” Walden said.

A summary of the draft is below. For the full text of the draft, please click here. To send comments to Walden, please visit walden.house.gov/klamath.

Water certainty for agriculture: The draft authorizes and implements the water agreements in both the Upper Klamath Basin and the Klamath Project, providing for a long-term and certain water supply for farmers and ranchers.

Power certainty for agriculture: The draft directs the federal Bureau of Reclamation to provide affordable power for farmers, ranchers, and communities in the Basin.

Transfer of federal lands and economic development funds to Klamath Tribes in exchange for waiving senior water rights: Under the draft, the Klamath Tribes would waive their senior water rights claims. In exchange, the Tribes would receive 100,000 acres of U.S. Forest Service land for timber production along with economic development funds for tribal members.

“I represent a critical part of the Klamath Basin, where the river’s water quality and the health of its fisheries are more than just policy issues; they’re the lifeblood of people and communities. Removing the Klamath dams and restoring the river and its fisheries to good health is, for my constituents, a critical need, which is why many of them helped lead the effort to craft the 2010 Klamath agreements. That’s why I’ve been urging action on the type of federal legislation called for under the agreement since I came to Congress almost three years ago.

“Toward that end, I’ve been pleased to work with and support Senators Merkley and Wyden as they made bipartisan progress in the Senate. Unfortunately, there has been no similar effort on the House side of the Capitol, where the majority party includes several members who are ideologically opposed to dam removal and the Klamath settlement.

“I was hopeful that the discussion draft circulated by Congressman Greg Walden today would track the bipartisan work led by Senators Merkley and Wyden that brought us to this point, and honor the historic compromise reflected in the Klamath settlement so that we could get to work on finally passing Klamath legislation and restoring the river.

“Unfortunately, Congressman Walden’s draft conspicuously leaves out the dam removal that’s vital to river restoration—the centerpiece of the whole agreement for my constituents in California—and adds poison pills in the form of massive giveaways of public lands that were never part of the settlement.

“This fundamentally flawed discussion draft, circulated just four weeks before the settlement expires, is a discouraging sign for those of us who urgently want to make progress on Klamath River restoration.

“Nevertheless, I remain committed to rolling up my sleeves and working in good faith with Congressman Walden, Senators Merkley and Wyden, and others in hopes of forging a reasonable and responsible Klamath compromise that can be signed into law before the end of the year. Despite three frustrating years of opposition, ambivalence, and inaction in the House of Representatives, I’m not giving up. But like many Klamath stakeholders, my patience is wearing thin. Whether through congressional action honoring the Klamath settlement, or through other legal means, the Klamath dams will come out and the tribes and other downstream interests I represent along the Klamath River will see the fisheries restored.”

Huffman represents California's second congressional district in the House, and serves as the Ranking Democrat on the Water, Power, and Oceans subcommittee.

Washington, DC – Following years of negotiations by Klamath leaders and months of hand wringing by congress, Representative Greg Walden released a draft bill aimed at resolving the contentious Klamath water crisis. By all measures, his aim was far off the mark.
“Congressman Walden told us all that he understood that dam removal had to be part of the bill or else irrigators would face water uncertainty. The draft bill he released today leaves out dam removal and instead replaces it with a giveaway of public lands. Communities in the basin left partisanship at the door to hammer out a solution. Mr. Walden must do the same,” said Karuk Councilman Josh Saxon. “If there is no dam deal, there is no damn deal,” added Saxon.
The draft legislation would give 100,000 acres of public land to Siskiyou County and Klamath County for timber harvest.
Walden released the draft bill after a high profile meeting with the senate’s leading proponents of the Klamath Settlement Agreements, Oregon Senators Wyden and Merkley, and key House Republicans including Doug LaMalfa (CA), Rob Bishop (UT) and Tom McClintock (CA).
Klamath communities have warred over water for decades. The Klamath Settlement Agreements were a careful attempt by Tribes, fishermen, ranchers, farmers, and dam owner PacifiCorp to resolve differences in a way that would fairly balance water use, restore valuable salmon runs, and ensure power customers have lowest possible rates. Without the Agreements, the future will undoubtedly feature more fish kills, water shortages for irrigators, and contentious lawsuits between neighboring communities.
The Klamath Agreements have unprecedented bi-partisan support at the grassroots level and the support of PacifiCorp, the company that owns the dams. Yet House republicans refuse to approve the deal. “There is no other solution to the Klamath Crisis. Greg Walden’s legacy is being forged right now and the next time there’s a fish kill or irrigation shut-off it will be no one’s fault but his,” concludes Karuk Chairman Russell ‘Buster’ Attebery.