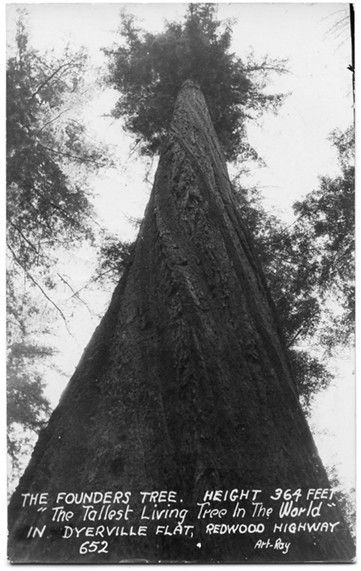 Since the early 1980s, the Humboldt Redwoods Interpretive Association has been celebrating the winter holidays by lighting a Christmas tree in front of the visitor’s center at Burlington, off Avenue of the Giants. Unknown to many is the fact that this continues a tradition started in the 1930s.

The vision of “living” Christmas trees began In 1926 when Clarence F. (Sandy) Pratt of San Francisco decorated a tree growing outside his home, lifting the spirits of a sick 7-year-old neighbor. Impressing and delighting his community, it also inspired many others in the state to follow his lead and by 1933, 75,000 outdoor trees were decorated in California. As president of the California Outdoor Christmas Tree Association, Pratt continued to promote living outdoor Christmas trees. In an interview printed in the Sausalito News on Nov. 20, 1931, Pratt encouraged Californians to light more outdoor Christmas trees to "drive away fear and depression.” Pratt and his association envisioned lighted Christmas trees lining the state's highways, believing they would "act as beacons to prosperity and spread this cheerful message of confidence."

Pratt’s message received an enthusiastic response and, over the course of the 1930s, increasing numbers of trees were lit around the state. Pratt's idea found purchase in communities in Humboldt County. Ferndale's outdoor tree, still lit annually to mark the season, is a tradition that began in 1934. Scotia had its own outdoor tree as well, a tradition that was maintained for decades by the company-town's long-time benefactor, the Pacific Lumber Company. This cherished tradition was only recently discontinued, after the acquisition of the bankrupt company's assets by the Humboldt Redwood Company.

Sponsored by the California Chamber of Commerce, the Outdoor Christmas Tree Association's goal in 1938 was again set at 100,000 lighted outdoor trees "as a fitting forerunner to the 1939 Exposition." The Sausalito News reported on Dec. 15, 1938 that in Humboldt Redwoods State Park’s Founder's Tree near Dyerville and the Molly Atkinson tree were to be lighted as part of the state-wide campaign. The newspaper reported that both trees were so tall that professional tree toppers had to be brought in to do the lighting work. Founder’s Tree was thought to be the world's tallest tree at the time, however, it later lost the designation after a storm knocked its top off and a taller redwood was discovered by Humboldt State University forestry students in Rockefeller forest. 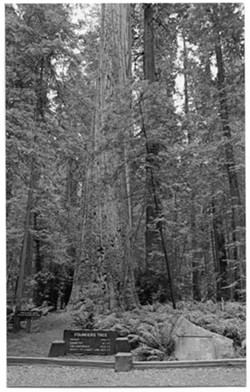 In 1941, William L. Stevenson of the Fortuna Rotary wanted more than a celebration of the Christmas holiday; he wanted a prayer for peace and victory amid the struggles of Word War II. He enlisted the aid of Charles Fulkerson of Humboldt State College to bring the school’s choir to the candlelight ceremony at Founder’s Grove, as well as a reverend from Fortuna, who led the group in prayer. Founder's Tree was lit up once again, according to the Sausalito News, "converted into a glorious, beautifully flood-lighted, living Christmas tree," illuminated by a number of 10,000 candle-power flood-lights. The Dec. 9 Humboldt Times reported that a test-lighting of the 2,000-year-old tree took place two days earlier, on Dec. 7, 1941, the same day a Japanese fleet conducted its infamous assault on Pearl Harbor. The lighting was repeated each evening from Dec. 11 to Jan. 1, despite war-time fears of a coastal attack. These fears proved well-founded after the tanker Emidio was destroyed by a Japanese submarine off Humboldt's coast on Dec. 20. Even after this local attack, the lighting of Founder's Tree continued.

The candlelight ceremony at Founder's Grove was repeated the following year, but in a much darker form. By December, 1942, very real war-time fears led to military-enforced blackouts along the California coast. This dimmed the outdoor Christmas trees for the duration of the war in coastal communities throughout the state, including the festivities at Dyerville, as reported in the Humboldt Times on Dec. 27, 1942. The lack of electric lights at the Founder's Grove failed to dim the spirits of Humboldt residents, however, who continued to put their best foot forward, maintaining their candle-lit observances in Dyerville during these war-darkened years. In 1943, the event was described in the Dec. 24 issue of the Long Beach Independent: “Colorful yuletide activities were held in Southern Humboldt County … by the Fortuna Rotary and the state park commission. The world’s tallest, and oldest, living Christmas tree, was a major attraction, reaching a height of 364 feet.”

The celebration at Founder's Grove would not see its former holiday glory again until after the end of World War II. According to an article in the Dec. 6, 1945 edition of the Sausalito News, Founder’s Tree was lit up once again on Aug. 17 of that year in observance of the Japanese surrender. More than 3,000 people signed the park’s register during the event.

Christmas festivities at the grove resumed with gusto on Dec. 21, 1945 and Founder’s Tree was once again lit with 50,000-candle power of holiday cheer. The Pacific Lumber Company paid for the electricity, and the East Power Company of Weott supplied the power.

This tree lighting was the most spectacular of the World War II era affairs and the event was broadcast by KSFO radio from San Francisco and the broadcast was heard not only in the bay area, but was also aired by the U.S. military nearly everywhere U.S. troops were stationed around the world, with the total potential audience numbering in the millions.

Pratt's vision brought cheer and hope to communities throughout the state during the dark years of the Great Depression and the second World War and started a tradition of outdoor lighted trees that persists in many places to this day. While the annual tree lighting at Burlington remains a favorite with local residents, the modern lighting of the tree must pale in comparison to the magnificent spectacle of Founder's Tree alight with 50,000-candle power of Christmas cheer and the incredible influence of an entire community coming together to hope for a brighter future.

James Garrison is the archivist for the Humboldt Historical Society and Susan J.P. O’Hara is a fourth grade teacher at Eagle Prairie Elementary School. A different version of this story appears in the Humboldt Redwoods State Park/Burlington Visitors Center newsletter for this month.