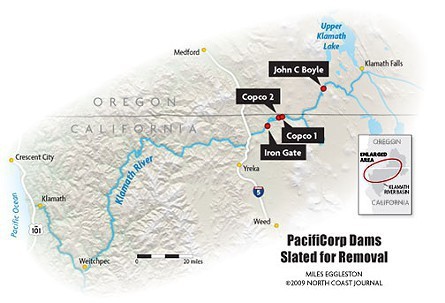 With Congress home for the holidays and hope of legislation to enact the Klamath Basin Restoration Agreement coming before the Dec. 31 deadline evaporated, stakeholders will gather for a conference call Monday. But don’t expect another extension or a unified path forward.

In a somber tone, Tucker explained that Monday’s conference call is a part of the agreement dozens of stakeholders struck in 2010, and is a formal part of the process needed to terminate the landmark agreements that would have removed four dams along the Klamath River and restored fish habitat, while giving irrigators and farmers some water security.

The agreements were forged over the course of years of arduous negotiations between PacificCorp — which owns the dams — Native American tribes, environmental groups and government agencies. The result was a compromise agreement under which no party got all they wanted but all received some bargained-for benefit. PacifiCorp got money to fund the removal of its four dams along the Klamath River and liability protection; farmers agreed to use less water to irrigate crops but received a guaranteed minimum allotment that would keep their hoses from being turned off in drought years; the tribes agreed to see water diverted to crops as long as there were adequate flows to support fish; and the dams would come down, which environmental groups have long believed was crucial to restoring salmon and other fish populations.

But the deal needed congressional approval, which appears to have proven a fatal hurdle. Senate bills introduced the last two years have stalled. The Republican-controlled house all but refused to introduce legislation until earlier this month, when Oregon Congressman Greg Walden released a draft bill that would have enacted most of the KBRA. But it left out dam removal and included the giveaway of 200,000 acres of federal forest lands to Klamath and Siskiyou counties. It was widely decried by stakeholders and Walden’s fellow Oregon lawmakers, and was never formally introduced.

The path forward is unclear.

“Congress has had its opportunity to solve this problem and we basically gave them a solution to a very complex problem served up with bipartisan, grass roots support,” Tucker said. “When the legislative branch is unable to do its job, we need to turn to the administrative and judicial branches.”

If the past is any indicator, that likely means lawsuits over water rights and river flows. Meanwhile, the Yurok Tribe, which announced plans to withdraw from the KBRA back in September, is now working in concert with the Hoopa Valley Tribe (which was part of the initial KBRA negotiations but never signed onto the agreement) to pursue dam removal through the Federal Energy Regulatory Commission’s licensing process.

Tucker said the Karuk Tribe plans on working with PacifiCorp — which he described as a “willing partner” — the Obama administration and some private partners to chart a path forward. Though Tucker said he’s leaving the KBRA process with friends and respected colleagues, he didn’t sound very optimistic that the relationships crafted through the compromise would smooth the process moving forward. Instead, he predicted a return to the acrimonious conflicts that dominated the Klamath River, from its headwaters to its mouth, for decades prior to the KBRA.

“There are relationships, but, you know, Robert E. Lee and U.S. Grant had a relationship too,” he said. “It’s kind of like if my kids were trying to share candy and I yelled at them and told them sharing isn’t allowed and one of them has to beat up the other and take all the candy — that’s kind of what I feel Congress has done to us. There are real relationships [among stakeholders], but at the end of the day the Karuk is going to fight tooth and nail to try to restore the fishery, and irrigators are going to fight tooth and nail to irrigate.”