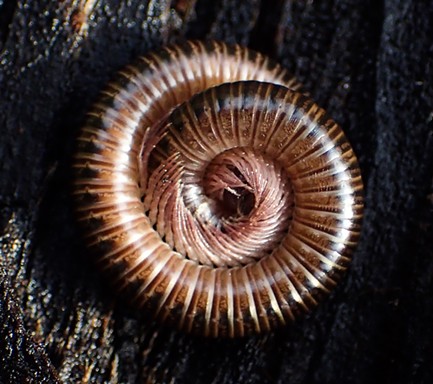 The biggest land “bug” that ever lived was a one-foot-wide, 6-foot-long millipede called Arthropleura. The largest nowadays is the foot-long giant African millipede, which some folks raise as pets. The good news is that millipedes on the whole are inoffensive critters, content to dine on decaying vegetation and fungi.

By nature millipedes are shy and retiring, spending much of their time under rocks and in leaf litter. They can't bite or sting, spread no known diseases and don't damage homes, pets or crops, unlike some other arthropods. There are some varieties near Kings Canyon that can glow in the dark, although none have been identified around here. 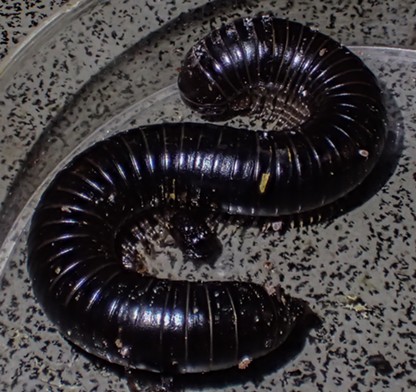 While the name “millipede” translates into "1,000 feet," they usually have fewer than 100, maxing out somewhere around 600. Watching one walk is poetry in a way. Their feet undulate in waves traveling down the length of the body. There is something kind of intriguing about an animal that could, by itself, substitute for an entire Busby Berkeley chorus line.

So, they're probably one of the most inoffensive critters to have around right? Well, there is this one little thing ... When disturbed, they can produce noxious substances that can smell really bad. Different species producing different mixtures. The smell of the ones I've been around is unique. And if the skunk’s defense isn't enough there are species that produce cyanide. I'm told those smell like almonds.

I wondered how they managed to handle a substance which is a universal poison, deadly to nearly everything on Earth. It turns out they have tiny pockets in their exoskeletons in which they mix two chemical precursors that react to produce the gas. Since they survive, I suspect they hold their breath, but they have been known to expire when confined in an air tight container for a long time.
I have indeed seen this species around here, but to date, not when I had a camera. This Wikipedia article does have some excellent photos, however.