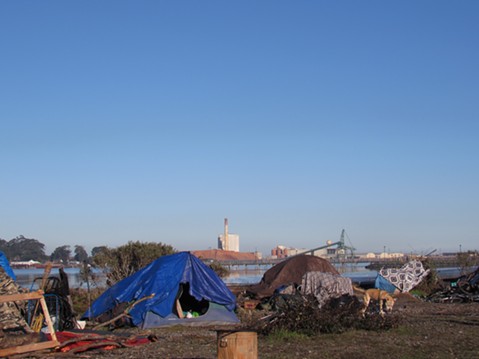 Tomorrow evening the Eureka City Council will meet to discuss two items related to the city's homeless: the feasibility of a temporary, sanctioned camp and whether or not the city should declare a shelter crisis. City Manager Greg Sparks said a site has been identified as a potential temporary camp, a city-owned parking lot at the corner of Washington and Koster.

Many critical of the city's slow-rolling attempts to address the ongoing issue of homeless people camped in region's greenbelts have stated their intention to appear. 480 people signed a petition distributed by the group Affordable Homeless Housing Alternatives requesting the city declare a shelter crisis, but if the report compiled by city staff in advance of the meeting is any indication, passing of such an ordinance seems unlikely.

The report states that "Eureka has had an adequate number of beds available for those who choose to avail themselves of shelter," and summarizes the existing homeless housing options in the Eureka and Arcata area, including transitional, low income and emergency shelter. The report fails to note that many of these existing housing options are currently full, with waiting lists.

Nezzie Wade, director of AHHA, said the Eureka Rescue Mission, commonly cited as an underused resource by those living rough, is not an option for many people.

"There's a difference between available and accessible. The report mentions motels, but they aren't affordable for most people, so they aren't available," she said. "I have serious questions about whether the Mission is available. When I talk to people who are outside, they don't see that as an available place. They don't want to give up their partner."

The Rescue Mission has a men and women's shelter, but couples cannot stay together. Nor can people bring in their dogs. In the report, city staff recommend that no declaration of a shelter crisis be made unless it coincides with the recommendations of Focus Strategies, a consulting firm the city hired to investigate the issue. Its long-delayed housing analysis is due for presentation later this month.

The report also cites the limitations of an emergency declaration, referencing California Government Code sections 8630-8634, which refers to natural disasters and concludes that the term "emergency" does not apply. But the applicable codes in this case are actually 8698-8698.2, and the standard is "the duly proclaimed existence of a situation in which a significant number of person are without the ability to obtain shelter, resulting in a threat to their health and safety." With the news that the Eureka Police Department would be compressing those camped in the PalCo Marsh into an even smaller area close to the "pole shed" section of the site, local activists and media gathered Thursday morning to document interactions between law enforcement and homeless people. Several carried protest signs, and almost all held cameras, which they pointed at EPD Chief Andy Mills, Capt. Stephen Watson and sheriff's office employees as they went about their duties.

Thursday is the scheduled day for the Sheriff's Work Alternative Program inmates to remove garbage and materials forbidden under the City's Open Space Property Management Plan. Those materials include pallets and camp stoves. Several advocates have criticized law enforcement for removing campers' belongings, but Watson said this doesn't happen unless it's within the course of an investigation, and that "EPD unfairly and frequently gets blamed for every action that takes place down there."

On the call for direct action posted online earlier in the week, advocate group Friends of the Humboldt Houseless said, "There is a good possibility of EPD criminalizing and destroying folks' property behind the Mall." About a dozen advocates arrived around the same time as the SWAP crew. As a loader rolled up and down the service road, hauling debris, a sheriff's deputy admonished protesters not to take photos of the inmates. The group moved down the road just ahead of the crew, videotaping EPD representatives as they spoke to those living on the muddy ground.

"When the storm came, we were in six inches of shitty water," said Jimmie Work, with whom Chief Mills spoke about his campfire. "Like, human shit. I tried to dig my tent out, and the cops ticketed me for digging without a permit. We're six feet below sea level. Whose brainchild was that?"

Work and his partner, Veronica Allen, had their camp set up further south, but moved to a lower spot when the city ordered the area to be condensed into an area closer to Del Norte Street. Over the last few weeks, those camping closest to Del Norte were notified that they would be condensed further, pushed in closer to the parking lot. Many living there resent having to move their tents closer to others. The recent storms have added additional stress; with many tents blowing down. Work described staying up through the night "for hours in the rain," physically holding the tent upright. Allen came down with hypothermia.

"Luckily, in the Army they teach you about that," said Work, who added that he had been shot with a paintball gun while out on the streets. Allen said that because of her arthritis and diabetes, constantly moving camp is a physical challenge.

"They pushed us down here, they're going to keep pushing us," she said.

In the meantime, Mills and Watson addressed questions from the crowd.

"Certainly we're searching for solutions. Here's what we can't have: this," Mills gestured towards a nearby camp. "It's a compound of tents. There are bike parts everywhere."

The compound-like nature and overflow of debris violate the city's Open Space Property Management ordinance, according Watson, who defines the standards for a camp's footprint as a "reasonable-sized tent with... items neatly placed around." SWAP crews have discarded building materials and items not confined within the boundaries of tents during the city's weekly cleanups. Most camped within the area complain of theft within the community as being a major issue as well. A temporary sanctioned camp, say some, would allow a degree of stability and security not currently present.

"People want to paint the homeless people as demons," said Mills. "We don't see that."

A member of Arcata's Unitarian Universalist Church, Chris Chapin, spoke with Watson about how his church could help people "move with dignity." As of press time, his fellowship was organizing to buy several tents and help people move. Watson and Chapin came to a verbal agreement for a two-week grace period, during which EPD will not conduct proactive enforcement in the areas previously scheduled to be evicted, specifically those adjacent to Del Norte Street. Watson praised Chapin's willingness to "do something tangible, not just talk about ideas."

In a phone call, Chapin said that his church is moving to purchase tents and work with EPD to identify the correct area in which they can set up and what would constitute an acceptable camp, although the establishment of a sanctuary camp may change these plans. EPD officers have been careful to state that they do not condone nor give permission to camp on city property, but will not do active enforcement on camping within a predetermined area, an area that is due to shrink by the end of January. Watson estimates his officers and staff spent roughly 3,880 hours in the PalCo Marsh in 2015, translating, by a Journal estimate, to more than $150,000 taxpayer dollars. The SWAP crews are a much better deal, costing the city $28,000 a year. Parks and Recreation Director Miles Slattery said he couldn't give a figure for the time and money his staff have put into the marsh, but said it isn't a significantly higher expense than they would otherwise incur.

"If we weren't cleaning up encampment remnants we would be cleaning up illegal dumping on the property and doing a better job of removing invasive plants," he said in an email. "Our waterfront and marsh areas have always been a place where there's been consistent illegal dumping. Even with the increase in encampments, it's hard to tell what material is from the illegal encampments and what is from illegal dumping."

Chapin and others are turning their eyes to Sacramento for help, now, as Sen. Mike McGuire recently announced his support of a state budget proposal that may result in more grant money set aside for rural California communities to address homelessness. The "No Place Like Home” initiative was outlined this morning by a bipartisan coalition of state senators.