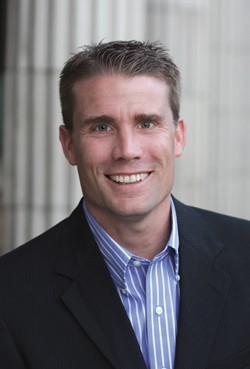 North Coast State Sen. Mike McGuire joined several of his colleagues in Los Angeles last week to unveil a proposed budget package that would throw more than $2 billion at housing California’s homeless population, the largest in the country.

“Whether it’s downtown L.A. on Skid Row, or downtown Eureka, local communities are lacking the funding they need to implement the housing programs and services local communities need and rely on,” McGuire said in a press release. “In many communities of the North Coast, there is a crisis every day, with little or no resources to turn to.”

The senators’ proposal is multi-faceted, but the main component is the idea of amending Proposition 63 to put aside $135 million annually to finance a $2 billion bond that would be used to build as many as 15,000 units of permanent, supportive housing for chronically homeless people with mental illnesses. Passed in 2004, Proposition 63 is commonly known as the “millionaires’ tax,” as it imposed a 1-percent tax on the state’s highest .1 percent of earners and earmarked the funds for mental health services.

But the proposal also contains other elements aimed at reducing the state’s estimated 116,000 homeless population, which includes some 1,319 people in Humboldt. It would:

— allocate $200 million over four years from the state’s general fund to provide supportive housing and rent subsidies while the permanent housing is under construction
— launch a “bringing families home” pilot project that would see the state and counties match funds in a program aimed at reducing homelessness among families in the child welfare system.
— launch the CalWORKS Housing Support Program to provide housing and support for poor California families in danger of becoming homeless
— Increase Supplemental Security Income and State Supplementary Payment program grants, which provide funds to the aged, blind and disabled poor who cannot work
— provide an unspecified one-time investment to incentivize local governments to boost outreach efforts and advocacy to make sure all eligible are enrolled in the SSI/SSP program.

The $2 billion in new housing for the homeless is being touted as falling in line with the “housing first” philosophy, which holds that providing someone with safe, secure housing and access to a plethora of wrap-around services is the cheapest and most effective way to reduce homelessness. It’s also the philosophy that a consultant hired by the city of Eureka — Focused Strategies — is pushing locally.

But the lawmakers’ proposal is just that — a proposal. They have pledged to incorporate it into the state’s June budget process, meaning they will ultimately have to craft a bill that will garner the support of the Assembly and the Senate, and the signature of Gov. Jerry Brown.

The details of the proposal are also entirely unclear at this point, so there’s currently no telling how the state would identify housing projects for funding or divvy the $2.2 billion in new funds between its 58 counties. It could be by population (bad for Humboldt), perceived need (possibly good for Humboldt), which county has the loudest and most energetic senator (potentially good for Humboldt) or some other means.

It’s also unclear exactly where the senators’ intend to draw the $135 million in Proposition 63 funds from. That’s about 7 percent of the tax’s revenue, and the state could opt to impose an across-the-board funding reduction for mental health services or make more targeted cuts. This year, Humboldt County is slated to receive about $6.5 million in Mental Health Services Act funding, money that will go toward providing integrated mental health services, early intervention programs, increase access to mental healthcare, and training and education designed to develop and grow the mental health workforce.

Still, amid the uncertainty, the proposal all but guarantees that the subject of homelessness will be front and center in the state Legislature when it reconvenes, and most would consider that a good thing in a state that is home to more than a third of the nation’s chronically homeless. And McGuire would argue that’s an especially good thing on the North Coast, which he says hasn’t seen any state investment north of Sonoma County to address the problem in the last two years.

It’s worth noting, that the Los Angeles Times reported that the funding proposal “reflects elected leaders’ growing frustration with local politicians, particularly in Los Angeles, who have failed to gain traction in the drive to help the state’s most destitute residents.” The report goes on to quote former Senate President Pro Tem Darrell Steinberg, who authored Proposition 63 and is supporting the current proposal, as saying he is “absolutely” frustrated with the inadequate response to homelessness by local governments.

While the senators’ proposal was certainly welcome news on the North Coast, which has seen raging debates locally on how to address the problem of homelessness, there’s still a lot of uncertainty. Nancy Stark, the legislative and policy manager for the Humboldt County Department of Health and Human Services, said she’s pleased to see that housing will be a top priority in the Legislature this year, as it topped Humboldt County’s legislative platform for 2016.

And, Stark said there’s a lot to be positive about in what the senators’ are proposing: bumping benefits for SSI beneficiaries and rolling out new resources to help families and children keep or attain housing are very good things. But when it comes to the centerpiece of the proposal and what it means for Humboldt, Stark said it’s too early to tell.

She said she’s already made calls to McGuire’s office looking to make sure the competitive grant process that rolls out for communities to apply for some of that $2 billion in housing funds won’t leave out small, rural communities. “Ensuring that small and rural communities are represented in that competitive application process is very important,” Stark said. “We know small, rural areas are often at a disadvantage in those processes competing against urban areas.”