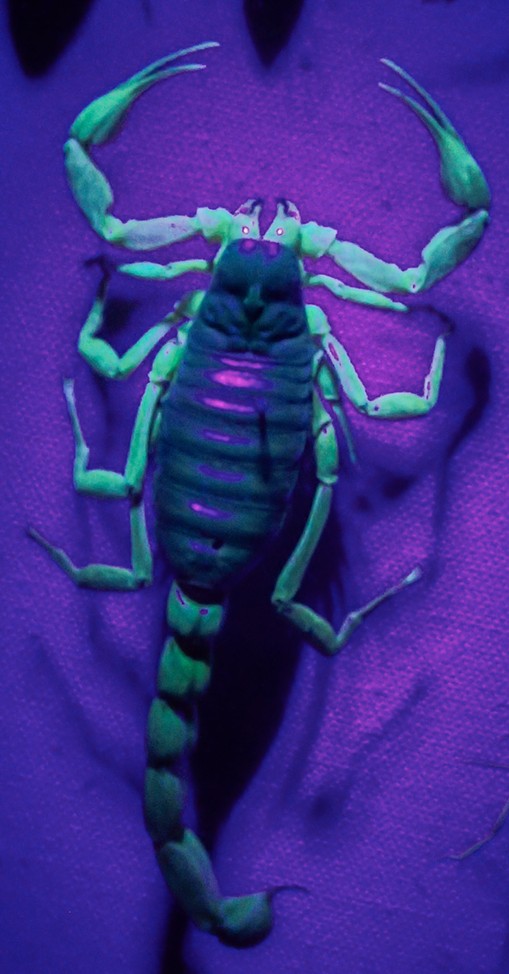 Despite tipping over every rock and lifting every piece of peeling bark on my property over the years, I have yet to find a scorpion. So, for the last few evenings, when I take my dogs out I've carried a black light flashlight. Scorpions are known to fluoresce under UV, which is a curious thing since they seldom come out during the day. One explanation is that they absorb the UV and re transmit the energy as green light so their photo receptors (they have some in their tails as well as their eyes) can pick up the signal, and since they are “negatively phototactic” (they avoid light) it might help protect them from overexposure.

Whatever the explanation, scorpion hunters put this characteristic to good use using black lights to find them at night.
I expected nothing, and was surprised a few nights ago when, crawling in and out of the redwood needles I saw something not just glowing, but glowing brilliantly. Cautiously — because although our local scorpions aren't known to be dangerous, any sting is never to be taken lightly — I poked around with a stick and uncovered one very active millipede. 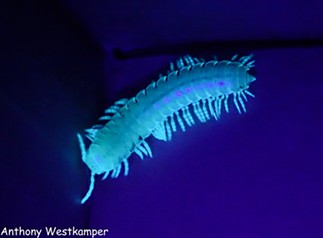 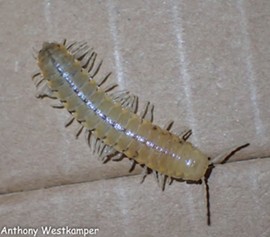 Knowing those are relatively harmless I picked it up and carried it back to my house. In regular light it was a rather dull tan color, but under my flashlight it glowed as bright as any mineral specimen I have ever seen. I even managed to take a short video. I sent photos to BugGuide.net and got a reply that it might be an immature member of the family Xystodesmidae which of all things contains Harpaphe haydeniana the cyanide millipede, a species I mentioned not being able to get a photo of in my post a few weeks ago.
It was suggested I raise it and see if it changes colors when it reaches maturity. I am terrible at that and seldom ever get a specimen to survive, so I opted to return it to where I found it, hoping it would make more so I might see them in the future.