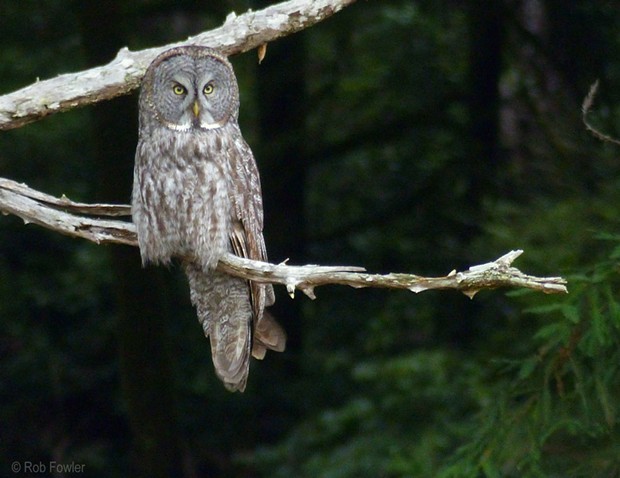 UPDATE: Local birder Rob Fowler was kind enough to send out some directions to the Great Gray Owl's current location, as well as some tips to follow to make sure the bird stays happy and safe during its Humboldt visit. Find Fowler's tips copied at the bottom of this post.

PREVIOUSLY:
The Humboldt County birding world is aflutter with news of the first sighting of a Great Gray Owl within the county’s borders in 34 years.

The Great Gray Owl — reportedly documented as the world’s largest species of owl by length — has breeding grounds in the cascade region of southern Oregon and in the Sierras around Yosemite. Humboldt’s notable visitor was first spotted by a state park ranger near Prairie Creek Redwoods State Park near Orick Wednesday, and word of its arrival traveled quickly through birding listserves, a rare bird alert phone system and social media.

Gary Bloomfield said he caught word of the bird Wednesday, and made his way up to catch a glimpse of it Thursday morning. For Bloomfield, it was a special opportunity: He’d been living in the dorms at Humboldt State University in January of 1982 when the last Great Gray Owl sighting occurred locally, but he’d been too sick to make it out to see it, spawning more than three decades of regret. But when he caught sight of the bird Thursday, it marked his 400th sighting of a Humboldt County native bird — a landmark milestone.

Rob Fowler, who owns Fowlerope Birding Tours, also made it up to see the owl Thursday and said he was struck by how accommodating and tame it was, noting that the bird wasn’t shy about venturing close to people and didn’t seem bothered by its flock of onlookers.

Fowler and Bloomfield both predicted a host of out-of-town birders will flood into Humboldt this week to catch sight of the rare bird and check it off their various lists. For the less initiated, they reminded folks to keep a respectful distance and not do anything to disturb the bird or their fellow observers. “You just don’t want to push the bird,” Fowler said. “Don’t try to approach it to where it’s going to change its behavior.”

The pair also suggested carpooling to reduce traffic up near Elk Meadow, near the park entrance, where the bird has been spending most of its time. Fowler said there’s also likely to be a crowd of folks with spotting scopes and binoculars, and most would probably be happy to share. “Birders are always willing to share a view of such a great bird,” Fowler said. “It’s pretty spectacular, and definitely a lot of birders’ dreams come true.”

It wouldn’t be a surprise for the bird to stick around a while, Fowler said, as the meadow up near the entrance of the park makes a good habitat for it, with an abundant food source and plenty of places to perch.

And, all are hopeful the bird meets a better fate than the last Great Gray Owl that ventured into Humboldt. That one was hit by a truck and killed, and now sits stuffed in the Humboldt State University Natural History Museum.

Check out a couple more of Fowler's photos, as well as a video from Bloomfield below. And, to get hooked into the latest local rare bird sightings, call 822-LOON.

This is some of the video of the Great Gray Owl I was able to phonescope through my spotting scope. 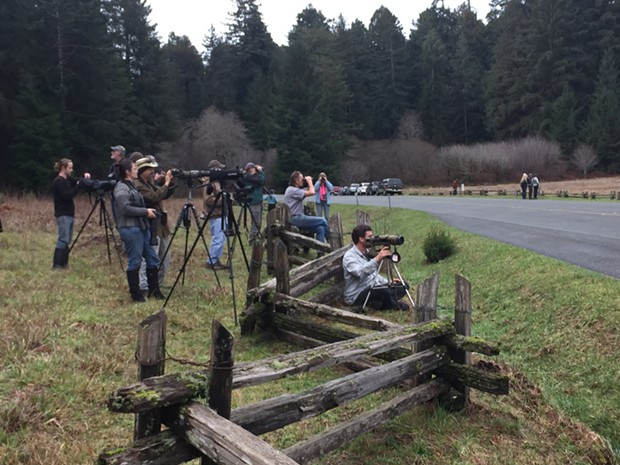 
Hi all,
Being that the weekend is upon us, and I know of a lot of birders traveling up to Humboldt to see the Great Gray Owl at Prairie Creek Redwoods State Park, I thought I would mention some suggested guidelines for viewing the bird and give some directions to it for people to reference.

Directions: Take Highway 101 north of Orick to the Newton B. Drury Prairie Creek Redwoods State Park exit. Drive under the overpass towards the park and very shortly you will come to the large meadow/prairie on your left where the bird is mostly hanging out. Park basically anywhere where there is obvious space along the road (LOTS OF SPACE FOR PARKING) and be sure to make sure you are not parking on dirt along the parkway. Some park rangers have had to ask people to move their vehicles so they aren't parked on grass or dirt.

Once parked look all around the meadow for the bird and if you arrive later in the morning or afternoon just look for the cluster of birders pointed all pointed in the same direction. The bird has been on both sides of the road but mostly spends most of it's time in the southern half of the meadow/prairie (Elk Prairie is the official name, btw). The bird has also been seen a lot right along the road perching on fenceposts and also east of the road perching in short redwoods and some low branches in larger redwoods right along the edge of the meadow.

The bird has been very accomodating. Nonetheless I think it's still important to suggest some guideline helpful for viewing the bird while not disturbing it or stressing it out in any way.

1) Give the bird space. If you give it time and have patience it will come towards you. Give it a lot of respect and don't crowd it. (Nobody has really done this yet, btw, from what I've heard). With patience and time you will get killer photos of this bird as it is SOOOOO obliging and easily observed and will at times get within just FEET of people. Please just let it do that on its own

2) I'd suggest just staying on either the road or on the trails that surround the prairie. The meadow is where this owls food is (voles mostly, I guess) so please consider staying out of the meadow to get closer looks at the bird. So, please stay on the trails and on the road side of the fencing that surrounds the meadow/prairie.

3)Try and be as quiet as possible. I think most people are keeping their voice to a minimum but remember that the owl is hunting its prey mostly by sound.

4) If you happen to see any birders/photographers getting uncomfortably close to the bird please speak up to that person and just let them know in a nice way to maybe back off a little bit. Be considerate about it.

5) Lastly, I don't think anybody would do this — especially since it is a public location within a well-traveled state park — but please don't consider baiting the owl with mice or any other critters. This type of behavior has happened in other locations with owls it and reflects badly on the people taking part in this behavior (mostly photographers). Only trained biologists should ever try and "mouse an owl" in (e.g., Spotted Owl biologists).
It sounds like everybody that has seen this bird thus far has reported pretty positive experiences with it. With the flood of visitors that will surely be coming up this weekend I just wanted to give a couple of suggestions for making the best of your Humboldt Great Gray Owl experience while also being sure to respect the bird and other birders and photographers that will be present.