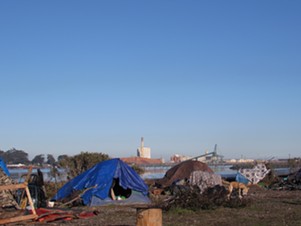 It has taken months for the respective orbits of the Humboldt County Board of Supervisors and the Eureka City Council to align, but tomorrow they will finally sit down to discuss the estimated 844 people who sleep unsheltered in Humboldt County. The majority of those people are in Eureka, which has borne the brunt of public debate and resource allocation.

Last week, the Eureka City Council declared a shelter crisis, easing codes and regulations on city facilities to accommodate the homeless. The declaration passed 3-2 despite the suggestions of dissenting councilmembers Marian Brady and Linda Ciarabellini that it be tabled pending tomorrow's meeting. The meeting will include a report from Focus Strategies, a Sacramento consulting firm to which Eureka paid $80,000 over the last year. A housing market analysis of Humboldt County, originally due for presentation in October, was finally unveiled via the Board of Supervisor's agenda, and is now available. (To view the document in its entirety, click the PDF at the bottom of this post.)

Some of the presentation, whose contents are recommended for further discussion at the next county meeting, have been covered in previous reports. The consultants have recommended a focus on creating low-income housing and implementing a "housing first" strategy to address homelessness. The Mobile Intervention Services Team (MIST) — a joint effort between the city of Eureka and the Department of Health and Human Services — may also get a boost, as Focus Strategies has called its work "very important" and recommended the addition of an alcohol and other drug specialist and a housing specialist to the team. Other recommendations include removing barriers to housing and prioritizing the integration of counseling with housing services. Some of the recommendations echo a recent report by the Humboldt County Grand Jury, which called for a more centralized data and services system.

The housing market analysis might not be what some expected — or hoped for. The data includes a list of projected available rental units and the estimated price. There are roughly three times as many homeless people in Humboldt County as there are rental units available to house them. Focus Strategies analyzed the projected vacancy rate for local buildings and gives projected one-year and three-year strategies for getting everyone currently outdoors under a roof. Given the impacted nature of housing in Humboldt, housing everyone in a year would require group living situations and some "intensive services to help clients build interpersonal and conflict resolution skills." A longer-term, three-year plan would require the "doubling up" of over half the current homeless population. Long story short: Getting everyone a bed indoors would require a lot of communal living situations, which would require a lot of services and intervention to make that communal living livable. The amount of housing stock in Humboldt County, Focus Strategies found, is lower than the state average, especially in Eureka, where 60 percent of homes were built before 1960.

The analysis concludes by saying, "Humboldt County appears to have adequate stock to house approximately two-thirds of the unsheltered homeless population within one year given existing housing inventory. Housing this proportion of individuals requires that the majority of single individuals share housing, although does not require more than one person per bedroom. It also requires that the community aggressively target a lower vacancy rate; one that is equal to average of the 10 tightest metropolitan rental markets in the US. This target may be ambitious, but it is not clear that it is unreasonable as many markets are functioning at or near this rate. Other creative strategies will clearly need to be used to house the remaining third of unsheltered homeless people."