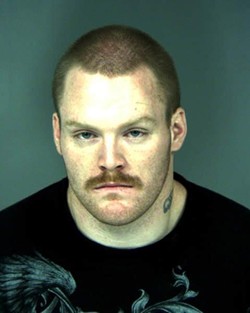 2nd UPDATE: EPD Chief Andy Mills has confirmed that the man shot by DA investigators this morning was Nickolas Ryan Joseph Johnson, a suspect in the April 28 deadly assault of David Dwane Ganfield. Johnson has been wanted in connection with Ganfield's death since April 2015.

Mills said DA investigators had "him on the run" and had zeroed in on the Pine Street home when Johnson opened the door and began firing.

"He came out literally firing on the officers, with a high velocity round," said Mills, who said several local homes were sprayed with bullets. Another person in the house where Johnson was hiding was detained for questioning.

1st UPDATE:
An unidentified man opened fire on Humboldt County District Attorney investigators conducting a homicide investigation near the 3200 block of Pine Street, prompting them to return fire, wounding the man, according to a Eureka Police Department press release.

The release states that the investigators were following up on an unspecified homicide case, attempting to contact residents in the area, when a man “came out firing an assault rifle towards investigators without warning.” The suspect underwent surgery and is expected to survive.

The Critical Incident Response Team investigation into the shooting is being co-led by the Humboldt County Sheriff’s Office and EPD. District Attorney Maggie Fleming announced in the EPD press release that, because her investigators were involved in the shooting, she has asked the California Attorney General’s Office to step in and review the incident to determine if any criminal charges are appropriate.


PREVIOUSLY:
A multi-agency investigation into an officer-involved shooting on Pine Street, near West Harris, is underway.

Eureka Police Department spokesperson Brittany Powell said the shooting occurred after a still-unidentified man allegedly opened fire on officers, who returned fire, striking the suspect. Powell said the suspect’s current condition is unknown, though Police Chief Andrew Mills added that he is “expected to survive.” No officers were injured in the incident.


The shooting is currently under investigation by the county’s Critical Incident Response Team, composed of officers from a variety of local agencies, and Powell said a weapon was recovered at the scene. Powell said it’s currently unclear how many shots were fired in the exchange, how many officers were involved and what prompted officers to initially contact the suspect.

This is the second time in the last three months that a suspect has opened fire on a police officer on the streets of Eureka. In November, a routine traffic stop turned deadly when a the driver, 20-year-old Killian Shane O’Quinn, pulled a gun and shot California Highway Patrol officer Steve Curtis in the leg. Curtis returned fire, killing O’Quinn.

Powell said she anticipates EPD will release more information about the shooting later today, and we’ll update this post with details as we get them.


On 01/26/16 at about 11:50 a.m., Investigators with the Humboldt County District Attorney’s Office were conducting follow-up on a homicide investigation near the 3200 block of Pine Street in Eureka. The Eureka Police Department’s Problem Oriented Policing Unit was a short distance away.

The DA Investigators were attempting to contact residents when a man came out firing an assault rifle towards Investigators without warning. Investigators returned fire, striking the man. The man was placed under arrest and transported to the hospital by ambulance. The man underwent surgery and is expected to survive.

The Critical Incident Response Team (CIRT) was activated and multiple agencies responded to assist. Because the DA’s office was involved, a Humboldt County Sheriff Investigator and Eureka Police Investigator were assigned as co-leads in the investigation.
District Attorney Maggie Fleming said, “I have made the decision that because Humboldt County District Attorney Investigators were involved in the shooting, I will not be involved in the review of the case and have asked the Attorney General’s Office to handle the review.”
Any witnesses to this incident are asked to call Senior Detective Harpham at (707) 441-4060.