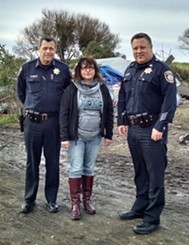 The Humboldt County Board of Supervisors has voted to remove the “interim” from Connie Beck’s job title and make her the official director of its Department of Health and Human Services.

Beck was appointed the department’s interim director back in December, taking over for the retiring Phillip Crandall after the supervisors’ hired replacement, Kristin Brinks, bailed on the job just weeks after having accepted it.

A 20-year veteran of the department, Beck has spent the last three years as its assistant director of administration.

The Humboldt County Board of Supervisors today appointed Connie Beck to the position of Director of the Department of Health & Human Services (DHHS).
Beck brings considerable experience and expertise to the position. She has worked for DHHS for 20 years and has been the department’s interim director since late December. She also served as Assistant Director, Administration for three years before being appointed to the position.

As director, Beck will oversee a department with a yearly operating budget of approximately $150 million and provides direct services to more than 38,000 residents each year. Beck will work collaboratively with a variety of county departments as well as public and private community stakeholders in developing and implementing programs and services to meet community needs.

Beck becomes only the second person to lead DHHS since 2001 when the integrated agency was created, combining what were previously six separate county departments into one. Phillip R. Crandall, the previous director, retired Dec. 29, 2015.