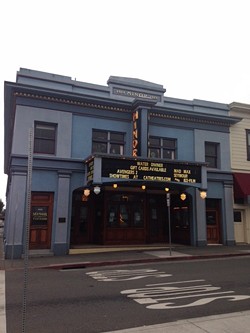 Coming Attractions, which has operated the Minor Theater in Arcata since 2005, will shut the historic theater down Feb. 5.

Josh Neff, who took ownership of the Minor Theater building and adjacent storefronts last year, says he plans to re-open the movie theater, but expects renovations to take at least a month. The theater celebrated its 100th anniversary at the end of 2014 and holds the niche historical significance of being the oldest "multi-reel feature film theater in the United States."
Neff says no one anticipated that the Minor would close so quickly — Coming Attraction’s lease on the building runs until April, and he had been negotiating with the company to stay open long enough to host the Humboldt State University student-run film festival that month.

Negotiations with the company, Neff says, were becoming more “sterile and corporate” up until the last time he spoke with representatives. Then, he says, he got an email this week saying Coming Attractions was sending a crew to dismantle the Minor's seats and equipment, which the company owns. Coming Attractions CEO John Schweiger did not return a call seeking comment.

Neff calls it a blessing in disguise — this way, he says, the theater will be back up and running for the film festival, which he expects to be the theater’s soft opening.

Meanwhile, he said, the Minor will be closed to customers for some time, and he’s offered to hire the Minor’s employees to help during the change in management.

The Journal will report more on Neff’s plans in the future.