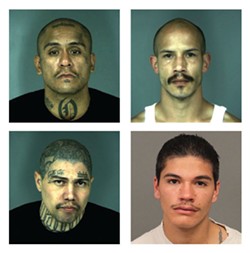 UPDATE:
Eighteen-year-old Joe Olivo III, one of four men accused of the gang-related murder of a 14-year-old Arcata boy in 2014, will be tried as an adult in the case, according Humboldt County District Attorney Maggie Fleming.

Olivo III, who police identified as a Sureño gang member, was arrested Feb. 2 in San Luis Obispo and is being charged with the Dec. 17, 2014 slaying of Jesus “Smiley” Romero-Garcia. Now 18, Olivo would have been 17, or possibly 16, at the time of Romero-Garcia’s killing, making him a juvenile in the eyes of the court, which judges defendant’s juvenile status by their age at the time of their alleged offense not when they are charged.

Fleming tells the Journal that she decided to try Olivo as an adult in the case after considering all the facts as they are currently known. She declined to give details of her reasoning for fear of damaging her office’s ability to prosecute the case.

While Olivo is being tried as an adult in the case, he won’t face the same maximum sentence as his co-defendants, all of who were adults at the time of Romero-Garcia’s death and face a maximum sentence of life in prison without the possibility of parole. (Fleming declined to detail why she isn’t pursuing the death penalty in the case, saying simply that the decision was made “after consideration of all the facts.”)

In 2005, the United States Supreme Court ruled that the death penalty constitutes cruel and unusual punishment for those who committed their crimes when they were under the age of 18. But until recently, juveniles in California were being sentenced to terms of life without the possibility of parole (LWOP). The California Supreme restricted those sentences in 2014, ordering judges to take into account a variety of factors when deciding whether to hand down a LWOP sentence to a juvenile.

But then a pair of state Senate bills — 2013’s S.B. 260 and 2015’s S.B. 261 — further restricted the sentences for juveniles and prohibit judge’s from imposing LWOP or even determinate sentences that extend beyond a juvenile defendant’s life expectancy. The rationale is that juvenile defendants are inherently different from their adult counterparts and have a greater capacity for rehabilitation.

What’s all this mean in Olivo’s case? The maximum sentence he faces if convicted is 25-years-to-life in prison, and he’ll be eligible for parole after 20 years in prison.

The Eureka Police Department held a press conference yesterday to announce it had arrested four men — Joe Olivo Jr., Joe Olivo III, Mario Nunez and Nicholas Leigl — for the killing of Jesus “Smiley” Romero-Garcia, who was found bleeding to death from three stab wounds to the chest on the morning of Dec. 17, 2014 in a residential neighborhood of Eureka. Police allege all four men have gang ties, with Olivo Jr. a “validated” member of the Mexican Mafia gang, Olivo III a Sureño gang member, Nunez a “validated” Sureño gang member and Leigl having “a history” with the local 18th Street gang. Police further alleged that the “motive behind the murder of Jesus appears to be for the furtherance of the Sureño gang and involved an internal dispute within the gang.”

On Jan. 29, the Humboldt County District Attorney’s Office filed a criminal complaint charging all four men with Romero-Garcia’s murder, and included a special circumstance allegation that the defendants intentionally killed the teen while active participants in a criminal street gang and in the furtherance of the gang’s activities. The special allegations elevate the murder case — which generally would carry a maximum sentence of 25 years to life in prison — to carrying a maximum sentence of either death or life in prison without parole. But Fleming told the Journal late Thursday that prosecutors are not seeking the death penalty in the case.

Olivo Jr. and Nunez are currently being held in state prison, while Olivo III is incarcerated in a San Luis Obispo County jail. Fleming’s office is looking to have all three transferred to the Humboldt County jail to face the new murder charges. Meanwhile, Leigl, who is in the local jail on an unrelated charge, is expected to be arraigned in the new case today.

While police appear confident they can prove the gang affiliation enhancement in the case of Romero-Garcia’s killing, the special allegation has been controversial throughout the state, as it gives prosecutors leeway to introduce evidence that might otherwise be inadmissible in a straightforward murder trial. In a breakdown of California murder laws written for his website, Los Angeles-based defense attorney Neil Shouse explains that prosecutors often charge the enhancement any time a homicide can even remotely be construed as gang-related.

“Not only does it increase the potential sentencing, but it allows them to present to the jury highly inflammatory evidence about the gang in question and the defendant’s connection to it,” Shouse wrote, explaining that the “inflammatory” evidence can color the rest of the trial and change jurors’ perception of the defendant.”

While on the campaign trail in 2014, Fleming said she supported the death penalty as a “most extraordinary punishment” for some cases, but added she hadn’t seen a case in her years as a prosecutor in which she felt it was appropriate.

For more about the defendants' arrest, view prior Journal coverage here.