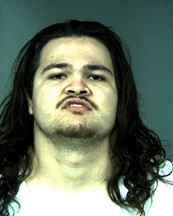 The Humboldt County Sheriff's SWAT team apprehended murder suspect Gearold Sotolongo at a Hoopa residence this morning, according to a press release.

Sotolongo was wanted in connection with the Feb. 13 killing of Hoopa and Weitchpec resident Rodger Allen Yale.

On Wednesday, March 9, 2016 at approximately 9:03 a.m. the Humboldt County Sheriff’s Special Weapons and Tactics (SWAT) team and Humboldt Drug Task Force (DTF) served a Ramey Warrant on a residence on Tish Tang Rd, Hoopa. The warrant was for 25 year old Gearold Sotolongo. Sotolongo is suspected of murdering 30 year old Roger Alan Yale in the Hoopa Valley on Saturday, February 13, 2016. The SWAT team safely took Sotolongo into custody. Sotolongo was taken to the Humboldt County Correctional Facility where he was booked for murder. His bail has been set at $1,000,000.

Officials are releasing few details about Yale's death, only that a call came into dispatch at 8:32 on Saturday morning reporting a disturbance at the Hoopa Mini-Mart on State Route 96. A second call at 8:39 confirmed that a man had been stabbed. At 9:01 a.m., an ambulance transporting Yale was en route to the helipad for a medical airlift, but he died before the helicopter left the ground.

The HCSO has identified Gearold Sotolongo, also known as Roldo Pratt or "Soto," a 30-year-old man also from Hoopa as a suspect. Responding to a tip, detectives raided a residential home on Monday morning with the help of a SWAT team but came up empty-handed. Some details, such as the type of weapon and the nature of the conflict that led to Yale's death, are still not being released as detectives continue to search for Sotolongo, who was last seen in the area of the Alameda Trailer Park on State Route 96. Sotolongo is described as 30-year-old Native American male, standing 5 feet, eight inches tall and weighing 225 pounds, with black shoulder length hair and a full beard.

The full press release from the Humboldt County Sheriff's Office:

Based the ongoing HCSO investigation into this mornings’ homicide in the Hoopa Valley, detectives have named Gearold Sotolongo aka Roldo Pratt as a suspect and he is now wanted for that homicide.

Sotolongo is described as 30 year old Native American male, 5’8, 225 lbs, black shoulder length hair and a full beard. Sotolongo was last seen in the area of the Alameda Trailer Park on Highway 96.

On 02-13-16, at approximately 8:32 AM, the Humboldt County Sheriff’s Office received a call regarding a disturbance in the Hoopa Valley. Deputies and Medical personnel arrived on scene and began life saving efforts on a 30 year old male. The victim was transported to a landing zone to be flown out by helicopter. The victim succumbed to his injury prior to being transported by helicopter.

There are no suspects at this time. This incident is currently being investigated by Detectives with the Humboldt County Sheriff’s Office.