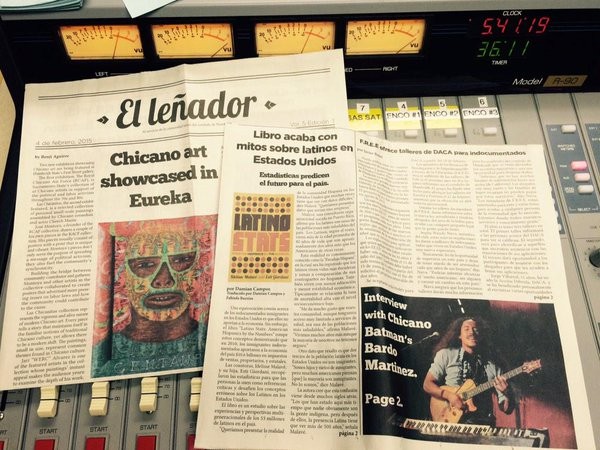 At its Excellence in Student Media awards banquet in Los Angeles, the California College Media Association tapped the now 3-year-old paper for its First Place prize for the category of Best Newspaper, with a judge noting that the Spanish-English paper “captures the multicultural component of its audience with flair.”

The paper has been a multi-departmental project at HSU, spearheaded by Journalism and Mass Communications Chair (and Journal columnist) Marcy Burstiner and World Languages and Cultures Chair Rosamel Benavides Garb.

Check out the press full press release copied below, which includes some special kudos for former El Leñador editor and Journal contributor Manuel Orbegozo. You can also view the paper’s award-winning issues here, here and here. And, it’s on news stands now in The Lumberjack, so make sure to pick it up.

"As a student journalist this is what you strive for," said El Leñador Editor-in-Chief Javier Rojas. "When this publication started back in 2013 the goal of El Leñador was to give a voice to underrepresented students on campus and now to be called the best newspaper, it's incredible."

In awarding El Leñador first place, the judges said: "It captures the multicultural component of its audience with flair."

El Leñador started in 2013 as an interdisciplinary faculty-student research project with students from the Journalism and Spanish majors teamed up with Journalism & Mass Communication Chair Marcy Burstiner and World Languages and Cultures Chair Rosamel Benavides-Garb.

"Huge credit goes to Manuel Orbegozo and Shareen McFall who were the first two editors of the paper," Rojas said. "They influenced the paper in so many ways and are equally deserving credit of this award."
El Leñador was initially funded by grants from the College of Arts, Humanities and Social Sciences. It also received funding from The Lumberjack, the Office of Diversity and Inclusion and the President's Loyalty Fund.

"Winning First Place was well-deserved," said Burstiner. "In just three years, these students have created a newspaper that serves not just the Latino community on campus but the wider Latino community of Humboldt County."

Rojas and his team will deliver the second issue of the spring term this week. "It makes me proud on many levels," Rojas said. "But I'm more happy for the staff and editors that came before me that had a heavy influence on the paper. "