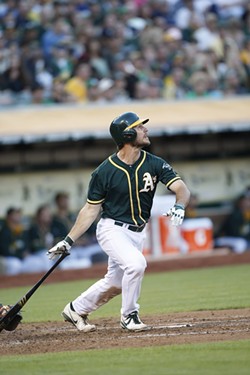 Humboldt-grown pro baseball player John Jaso is the subject of a fantastic article that came out this week on VICE Sports. In it, Jaso’s former teammate Fernando Perez (a World Series champ and he’s a better writer than me? Sigh) talks with Jaso about playing catcher, diva pitchers, being a Moneyball player and the debilitating concussions he suffered two years in a row.

The Journal wrote about Jaso, a McKinleyville High grad, in 2014. He spent years in the Tampa Bay farm system before being called up as the team's starting catcher. He was then traded to Oakland, where he spent a couple seasons as one half of baseball’s best catching platoon (meaning the team manager strategically started either Jaso or Derek Norris in the position, depending on the day’s opponents.)

This season, Jaso’s on the Pittsburgh Pirates roster at first base — a position he’s only played in two major league games, according to ESPN. It’s the first in a two-year contract with the Pennsylvania team, which got knocked out of championship play by the Cubs in last year’s National League wild card game. It’s great news for Jaso, whose future in the majors looked iffy after his repeated run-ins with concussions.

I’ll recap some highlights below, but go read Perez’s hilarious column; it’s another account of Jaso as an approachable, goofy, thoughtful and charming guy. As Perez writes, “one of a few handfuls of major leaguers who can actually blend in with society.”

— Last year Jaso grew dreadlocks. Yes. He is apparently the first white player in baseball to do so, which completely solidifies his Humboldt cred.

— Jaso opens up about his concussions. “I took three bad shots in the same inning. I had never taken so many shots off the mask in a row like that. I was just expecting to shake it off like you would if you just took one or two and the next inning I go out to catch and I literally couldn't see the ball coming out of A.J. Griffin's (the pitcher's) hand. I wouldn't see the ball until it was like halfway to me.”

— He also talks about nausea, throwing up in a garbage can during warmup as a result of concussions. It’s both a testament to the psychology of “shaking it off” that pervades sports injuries, as well as an illustration of how misunderstood — or underappreciated — concussions are. The Journal talked with Jaso about his concussions, and wrote about new local concussion research extensively, but his interviews in the VICE piece are enlightening.

It’s a good read. And yes, this is Giants territory (even year!) but if you’re not a Jaso fan, grab some pine, meat.