HumBug: Spring in the Air A walk on a recent sunny day yielded quite a few butterflies. All were busy, few staying in one place long enough to pose for a picture. There were many Pieris marginalis (aka margined whites), which are often mistaken for their close relatives the cabbage butterfly. I saw two Nymphalis antiopa, or mourning cloaks, one of which was perfect and new while the other was bedraggled and worn. The fresh one landed, but flew away before I could get a good picture. There were a great many tiny Celastrina ladon, or azure blues, zipping around damp spots on the river bar. Once they land, they keep their wings closed above their backs, hiding the brilliant blue of their upper surfaces. Finally, on my way home a pair of rusty orange streaks flew by me. I paused and watched the two rapidly circle each other, spiraling upward with dizzying speed. Finally, one disappeared into the clutter of a madrone tree's foliage and the other flew up the path and landed, spreading its wings in the sun. The orange butterflies were of the anglewing species, I believe, though that family forms a challenging complex. I spent the next minute or so advancing one stealthy step at a time until I managed to get to the extreme limit of my camera's lens and snap a picture. Step by step, I snapped a photo with each pause, until I was close enough to get an acceptable photo. 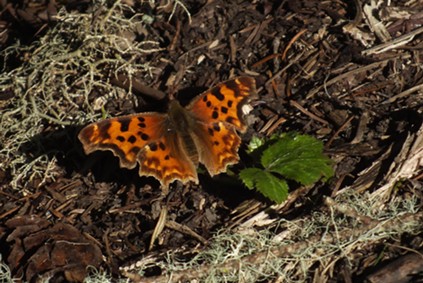 With insect photography, close counts, so I developed this process: See the subject, turn on the camera, snap a photo and check the picture, adjusting anything that needs it. Advance toward it, snap another and repeat as often as you can. This assures you your camera is set up the way you want it to get the best picture possible. (You haven't left the lens cap on or have it set up for a moon shot.) Each photo will be closer and likely better than the last, so you always get the best photo possible under the conditions. 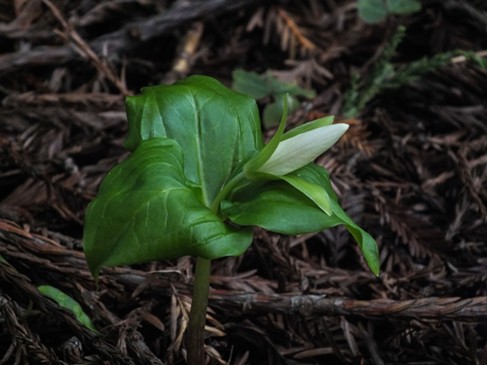 I also saw my first trillium and hounds' tongue flowers blooming, and when I got home there was another springtime surprise: A tick was crawling on my leg. Yes, it is that time of year again.