Humboldt Bay to Turn Red in Name of Science 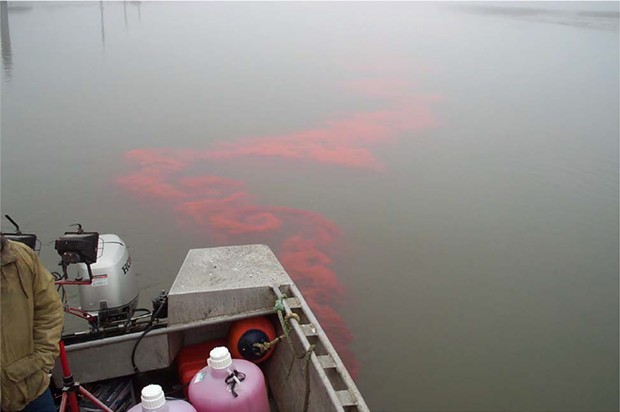 Some water testing next week may leave those in and around Humboldt Bay seeing red.

The California Department of Public Health and the U.S. Food and Drug Administration announced that they will begin a series of water tests March 14 that will include dumping a non-toxic, fluorescent red dye — Rhodamine WT — into the bay to help track how wastewater flows and dilutes in Humboldt Bay. The test — which comes as a part of the state’s evaluation of Arcata’s proposal to move the outflow of treated sewage from its wastewater treatment plant to a new location within the bay — seeks to make sure the bay’s commercial shellfish industry is protected from potential sources of contamination.

“The goal here is the safety of people who like to eat commercially harvested shellfish, such as oysters, clams and mussels,” said California Department of Public Health Director Karen Smith in a press release. “While this may cause the bay to look unusual, the water should return to its normal color within days. The dye is commonly used for these studies and has an excellent safety record.”

Humboldt County Division of Environmental Health Director Melissa Martel said scientists will be using the dye to track the outflow from both the Arcata Waster Treatment Facility’s proposed new location and Eureka’s Elk River Wastewater Treatment Facility, to see where it's carried by bay currents and how quickly it dilutes. She said a similar study was conducted back in 2004, and warned that folks recreating on the bay or simply passing by might notice a striking red hue to the water.

The commercial shellfish industry in Humboldt Bay is on board with the study, according to the press release, and will provide unspecified assistance to the scientists.

Testing is expected to begin March 14 and run through March 25. See the full press release from the California Department of Public Health copied below.

The study, which runs March 14 - 25, 2016, will provide information to protect commercial shellfish growing areas from potential sources of pollution. A similar study was conducted in 2004.

“The goal here is the safety of people who like to eat commercially harvested shellfish, such as oysters, clams and mussels,” said Dr. Smith. “While this may cause the bay to look unusual, the water should return to its natural color within days. The dye is commonly used for these studies and has an excellent safety record.”

The non-toxic, fluorescent dye, Rhodamine WT, will be used near the Arcata and Elk River wastewater treatment plants. Scientists, aboard boats and on the shore, will observe the colored water with instrumentation to see how the currents flow and how the dye is diluted. This will illustrate how water currents and transport of treated wastewater could be affected by proposed improvements to the Arcata Wastewater Treatment Plant, and a proposed move of the plant’s outfall. That information will help CDPH decide where commercial shellfishing can safely be allowed.

Local certified shellfish growers will provide assistance to technical staff from CDPH and the U.S. Food and Drug Administration.