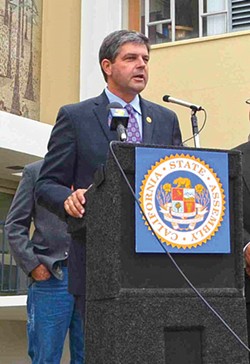 Really want that Double Big Gulp? Well, come next year, you’ll have to pay an extra $1.28 for it, if North Coast Assemblyman Jim Wood has anything to say about it.

Kicking off what’s proven to be a busy week for Wood and health news, the assemblyman introduced a bill that would impose a 2-cent-per-ounce tax — dubbed a health impact fee — on sugar-sweetened beverages, including sodas and energy drinks. Revenue from the fee — projected to be as much as $2.3 billion per year — would then be doled out in grants to cities, counties and nonprofits to fund childhood obesity and diabetes prevention efforts, and oral health programs.

While the fee will be imposed at the distributor level, it seems a safe bet it will be passed along to consumers.

The bill has already drawn the ire of Californians for Food and Beverage Choice, an arm of the California Beverage Association, which killed similar legislative efforts in 2014 and 2015. “The last thing that hard-working Californians need is another tax, which will only make it even more difficult to make ends meet in one of the most expensive states in the nation,” Bob Acherman, executive director of CalBev, told the Los Angeles Times.

But Wood believes the last thing Californians need is to drink more soda.

“The number of children being diagnosed today with adult-onset-diabetes is frightening, particularly when you consider that the disease was almost nonexistent in children three decades ago,” the assemblyman and dentist said in a press release. “Despite this alarming trend and the decades-long pleas from healthcare practitioners, California has made little to no financial investment to counter the problem. As the eighth largest economy in the world, I find this unacceptable.”

According Kick the Can, a statewide campaign to decrease sugary beverage consumption, the average American drinks 42 gallons of sugary beverage annually, dumping some 39 pounds of sugar into their diets. A host of studies have also tracked how America’s obesity epidemic has mirrored its skyrocketing beverage sizes, noting that while the first fountain drinks were offered at McDonald’s in a 7-ounce size in 1955, the fast food giant’s kid’s size now comes in at 12 ounces, with a 42-ounce adult supersize version available.

According to the National Center for Health Statistics, fewer than 10 percent of Americans were clinically obese in 1950. Today, more than a third — 34.9 percent — classify as such.

Breaking down the math on the projected $2.3 billion in revenue from Wood's bill, it's apparent the state is projecting that Californians drink the equivalent of 9.6 billion 12-ounce cans of soda or other sugary drinks a year. That breaks down to the equivalent of 245 cans annually for every single one of the California's 39 million residents.

In other news, the Legislature passed a landmark tobacco bill earlier in the week, which melded a Wood bill with those of several other legislators. The bill that now goes to Gov. Jerry Brown for consideration would raise the minimum smoking age from 18 to 21 and make the Golden State only the second in the nation to make the jump. (In the face of some controversy, Wood authored an exception for Californians under the age of 21 who are in active military service.)

In pushing for the bill, Wood pointed out that 90 percent of all smokers report having started before the age of 21, adding in a statement that “fewer smokers means healthier people.”

So what’d Wood get for all his hard, healthy work this week? A plum committee assignment, that’s what. Wood’s office announced Thursday that he’d been tapped by newly sworn Speaker Anthony Rendon to chair the formidable Assembly Health Committee. The assignment is a big one for Wood, who made rural health a cornerstone of his campaign for office and has carried the torch into the Assembly chambers.

“Rural California is currently experiencing a healthcare crisis,” Wood said in a press release on the appointment. “We must find a way to encourage more providers to live and work in our rural communities. As a healthcare provider that represents a largely rural district, I am excited about the possibilities for progress in this area.”

To read more about all Wood’s health related doings, visit his website here and see the flurry of press releases copied below.

On the committee appointment:

“Ensuring access to affordable quality healthcare has been a lifelong passion of mine. I began my professional life as a dentist and a healthcare provider where I witnessed first-hand the immense healthcare challenges we face in California,” said Wood. “I would like to thank Speaker Rendon for this tremendous opportunity, I am looking forward to using this committee to work closely with my colleagues and our new Speaker to address our key priorities this year, including the unprecedented number of Californians living in poverty.”

In his first year in the Assembly Dr. Wood successfully authored an impressive package of healthcare measures including bills to; increase the minimum age to purchase tobacco from 18-21, to improve access to healthcare in rural areas, and to ensure medical marijuana patients have access to safe medicine that doesn’t mistakenly wind up in the hands of children.

“Rural California is currently experiencing a healthcare crisis,” said Wood. “We must find a way to encourage more providers to live and work in our rural communities. As a healthcare provider that represents a largely rural district, I am excited about the possibilities for progress in this area.”

Assemblyman Wood takes over as Chair of the Assembly Health Committee effective immediately.

On the smoking bill, before it was approved by the Senate:

(Sacramento) – With Assemblymember Jim Wood (D-Healdsburg) leading the way, the California Assembly approved a bill that would raise the minimum smoking age in California from 18 to 21. “It’s estimated that 90% of all smokers start before the age of 21,” said Assemblymember Wood. “Fewer smokers means healthier people, healthier people means we spend less money on healthcare. The only loser in this equation is the tobacco companies, and in my opinion, they have won for long enough.” The University of California, San Francisco recently published a study estimating that Californian’s spend over $9.8 billion treating the effects of tobacco use every year, roughly $3.5billion of which is billed directly to Medi-Cal. Learn more in this Assembly Access video.http://www.asmdc.org/wood

(Sacramento) – Today the California Assembly approved a bill that would raise the minimum smoking age in California from 18 to 21. Senate Bill (SB) 2X-7 is part of the Second Extraordinary Session called by the Governor in June 2015 and represents a merger of Assemblyman Jim Wood’s (D-Healdsburg) Assembly Bill (AB) 2X-8 and Senator Ed Hernández’s (D-West Covina) SB 2X-7. Assemblyman Wood is now the principle co-author of the bill that will head to the Governor’s desk.

Assemblyman Wood said, “It’s estimated that 90% of all smokers start before the age of 21. Fewer smokers means healthier people, healthier people means we spend less money on healthcare. The only loser in this equation is the tobacco companies, and in my opinion, they have won for long enough.”

The parts of an adolescent’s brain responsible for decision making and impulse control are not fully developed at age 18 causing young brains to be highly susceptible to the addictive properties of nicotine. This bill, authored by two healthcare providers in the legislature, recognizes this phenomenon and helps protect young people from a potential lifetime of addiction.

The University of California, San Francisco recently published a study estimating that Californian’s spend over $9.8 billion treating the effects of tobacco use every year, roughly $3.5billion of which is billed directly to Medi-Cal.

Assemblymember Wood served as Mayor when the City of Healdsburg became the first city in the state to pass a ban on the sale of tobacco products to anyone under 21 years old.

“As a healthcare provider I see first-hand the devastating effects of tobacco use. I have worked on policy to reduce tobacco consumption my whole life, I am so grateful to my colleagues who stood up, did the right thing, and helped make this happen,” said Assemblyman Wood.

In July of 2015 the Center for Disease Control released a study indicating that 75% of adults support raising the minimum age to 21, including 70% of current smokers.

On the sugary drink tax:

(Sacramento) – Today, three California legislators introduced legislation that would establish a health impact fee on sugar sweetened beverages in an effort to fund obesity, diabetes prevention and dental programs. The measure, AB 2782, authored by Assemblymember Richard Bloom (D-Santa Monica), and coauthored by Assemblymembers David Chiu (D-San Francisco) and Jim Wood (D-Healdsburg), and sponsored by numerous leading health advocacy organizations throughout the state, would generate an estimated $2.3 billion a year to prevent and treat obesity, diabetes, heart and dental disease that is ravaging the Golden State and the rest of the country.

“Science overwhelmingly demonstrates that the overconsumption of soda and other sugar laden beverages has led to an epidemic of diabetes, heart disease, and obesity throughout our country and here in California,” said Bloom. “Disease that is directly attributed to the overconsumption of sugary beverages costs us billions and brings with it untold misery that disproportionately affects disadvantaged communities and people of color. Now is the time to take action and begin to reverse the negative and preventable health impacts caused by these products.”

“Nationally, obesity rates have doubled in the last 30 years, unleashing untold damage on the health of our nation in the form of heart disease, kidney disease and tooth decay,” said Chiu. “Quietly and with little fanfare, diabetes rates have skyrocketed, to the point where 2.4 million Californians are now afflicted, including 1 in 2 Latino and African American kids. We must do more to confront these daunting challenges to our collective health.”

“The number of children being diagnosed today with adult-onset-diabetes is frightening particularly when you consider that the disease was virtually non-existent among children three decades ago,” said Wood. “Despite this alarming trend and the decades-long pleas from healthcare practitioners, California has made little to no financial investment to counter the problem. As the eight largest economy in the world, I find this unacceptable.”

Soda and other sugar sweetened beverages are the number one source of added sugar in the American diet, and are linked to increased risk of diabetes and other diseases, like heart and liver disease, obesity, and tooth decay. Studies have shown that the number of people diagnosed with diabetes in California has jumped 50 percent between 2001 and 2012. Unless the trend is reversed, one in three of our children born after 2000 – and half of Latino and African American children – will go on to develop Type 2 Diabetes in their lifetimes.

Moreover, the California obesity rate has skyrocketed from nine percent in 1984 to over 25 percent today and is projected to increase to 47 percent by 2030. Diabetes alone adds an extra 1.6 billion dollars every year to state hospitalization costs – money which would be better invested in preventive health and education.

AB 2782 confronts these negative health impacts head on by creating a revenue source to fund programs that educate communities on the dangers of over consumption of sugar-sweetened beverages and provide tools and resources for healthy alternatives. The fund will be used to award grants to counties, cities, nonprofit organizations, community-based organizations, and licensed clinics that seek to invest in childhood obesity and diabetes prevention activities, and oral health programs.

The bill is expected to be heard in its first policy committee in the Assembly sometime next month.