In a recent exchange on an entomological Facebook page, someone urged me not to destroy the dandelions in my yard. I was told they are one of the first and most persistent sources of pollen and nectar for early emerging insects. The idea that the scourge of the lawnmower set could be so important amused me. However, always ready to question things, I did a few quick filters on my photo organizer and found 146 pictures of various insects fueling up at the brilliant yellow flowers. There were members of many orders: Coleoptera (beetles), Diptera (glies), Hymenoptera (wasps and bees), Lepidoptera, butterflies and moths, and Dermaptera (earwig). It appeared that one earwig was actually eating the flower, petals and all. 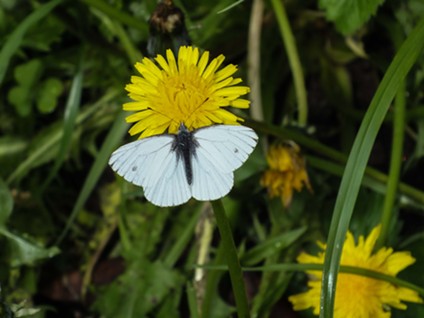 So, I did a little reading on Taraxacum officinale, the common imported weed in our lawns. Alien invaders from the Old World they actually aren't all that invasive except in an environment where the competing grass and weeds are regularly mowed or disturbed. You almost never see them in an open meadow.

Among their laudable traits is the fact that they can produce latex similar to the traditional rubber tree. Continental Tire company is currently running trials on tires using “Taraxagum” tread.
So, for now at least, I will postpone mowing the back yard. It's good to have a reason if anyone asks.