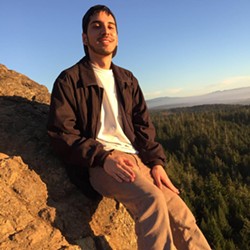 The names of the three Humboldt State University students involved in a car crash on Sunday have been released. Anthropology major Robert Romeri was killed when his car struck a tree around 10 a.m. near Crescent City. His passengers, Alexis Galvan and Pearla Saole, were sent to Mercy Medical Center in Redding with injuries.

The names of three Humboldt State students who were involved in a car crash Sunday morning near Crescent City have been released.

Anthropology major Robert Romeri, who was from Ranchos Palos Verdes, California, had been driving on Highway 101 when he lost control of his car and crashed into a tree around 10 a.m. He died and his passengers, Alexis Galvan and Pearla Saole, were injured.

Galvan, who is studying Environmental Management and Protection, and Saole, a Psychology major, are being treated at Mercy Medical Center in Redding.

The California Highway Patrol is continuing to investigate, and has been in close contact with University Police. Campus officials are reaching out to family members, friends, and others to provide support and other assistance.

Humboldt State is offering support for members of the campus community who may need it during this time. Students can contact the Dean of Students office at (707) 826-3504 or visit that office in Siemens Hall 211. Staff or faculty may utilize the Employee Assistance Program at (707) 443-7358.