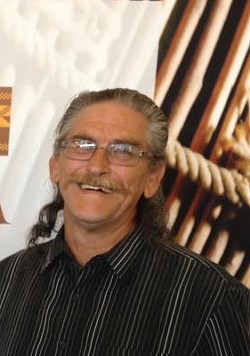 Yurok Tribal Chair James Dunlap resigned today, as a dark period from his past bubbled into public view.

Early in the day, social media reports began to surface that Dunlap — elected to chair the tribe last year — had fatally stabbed his 3-month-old daughter in San Mateo back in 1988. Within hours, a press release came from the Yurok Tribe announcing Dunlap’s resignation “following the discovery of information from his past.”

The press release states that the tribe “recently became aware” of Dunlap’s past, with tribal Vice Chair David Gensaw Sr. calling it a “sad and frustrating day for the Yurok people.”

According to the San Jose Mercury News, on Sept. 9, 1988, San Mateo police arrived at a house where Dunlap and his family were visiting relatives “just as James Dunlap, 30, of Hoopa, was lifting the girl over his head and yelling out that he had sacrificed her to God. The girl, Brittaney, had been stabbed with a buck knife in her crib, police said.”

Police then took Dunlap to the psychiatric ward of a local hospital, where he reportedly told workers he’d killed his daughter “to set her free for God.” Police said they suspected Dunlap was under the influence of methamphetamine.

San Mateo Chief Deputy District Attorney Karen Guidotti said Dunlap was ultimately charged with murder, and entered dual pleas of not guilty and not guilty by reason of insanity. After a jury convicted Dunlap in 1990 of second degree murder for the infant’s slaying, it deemed him legally insane at the time. Guidotti said Dunlap was then sent to Atascadero State Hospital but, at the order of a San Mateo County Superior Court judge, was released to outpatient status in 1993. After a couple of years of community supervision and outpatient treatment, Dunlap was found “restored to sanity in 1995,” according to Guidotti.

To find a defendant not guilty by reason of insanity in California, a jury must decide the evidence shows the defendant both didn’t understand the “nature and quality of his act” and wasn’t able to distinguish between right and wrong at the time he or she committed the crimes.

In a short bio written for his campaign for tribal office, Dunlap states he grew up in the San Francisco Bay Area and attended San Jose State University. He notes that he was president of the All Indian Boarding Schools Association from 2001 until 2006, and that he currently serves as chair of the Board of Directors for Drug and Alcohol Detox and Treatment Services. He states that he carries in his pocket a “chip celebrating 26 years of sobriety.”

Judging from the tribe’s official response and tribal members' comments on social media it appears that most were unaware of Dunlap’s past, but that’s a bit curious as the tribe claims in its press release that “all Tribal elected officials are put through a background investigation.”

In its press release, the tribe notes that the tribal council “does not have any additional comments at this time.” Attempts to reach Dunlap for comment on this story were unsuccessful.